A drawing a day and zen on the unicycle

A drawing a day and zen on the unicycle 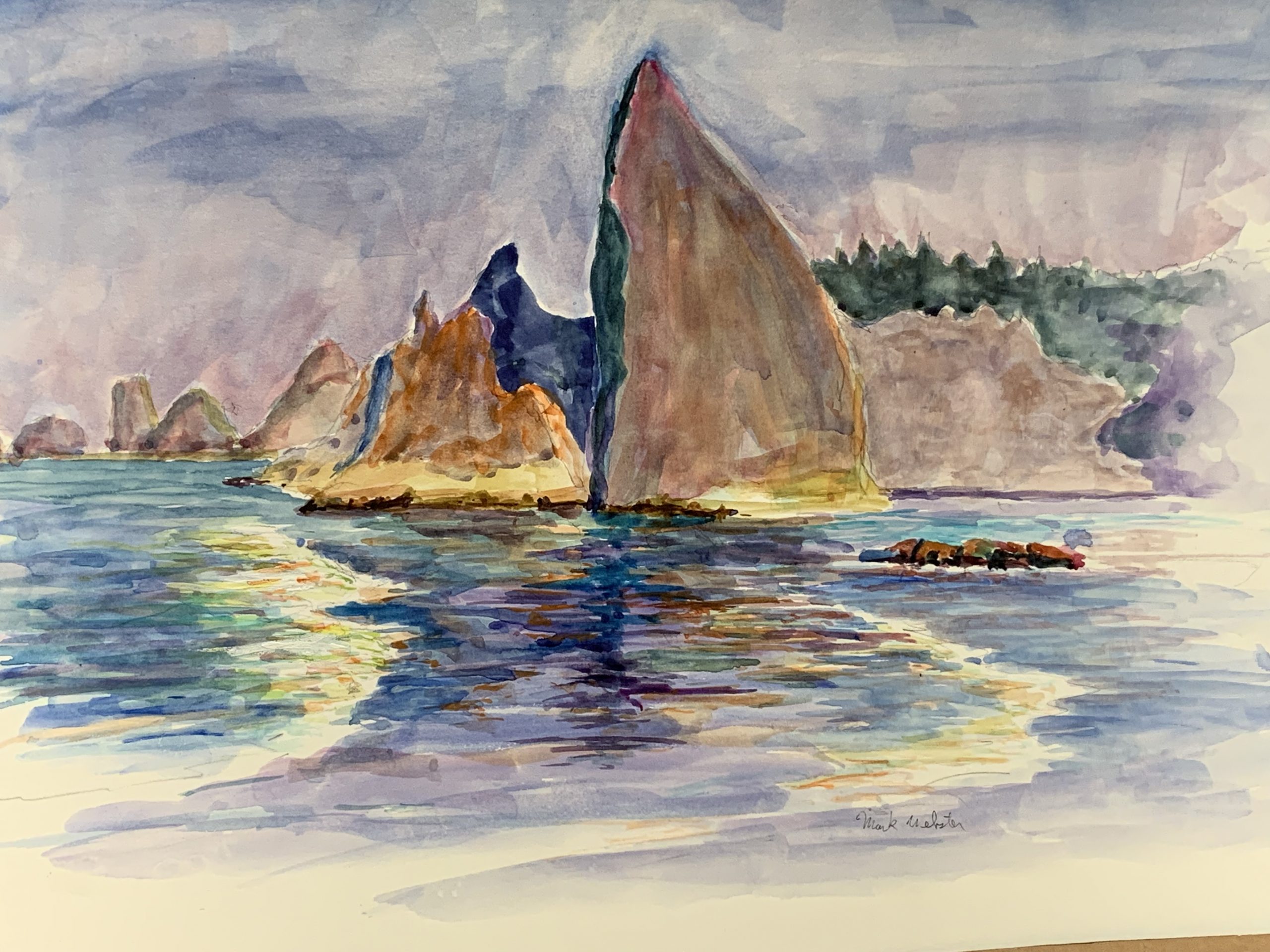 I haven’t written in 16 days. We did so many things I barely know where to start. The first thing was Sue and I backpacked two nights at LaPush to Rialto Beach. It’s a 3 mile round trip and people were towing wagons with full size beer coolers up the deep gravel of low tide. I painted two moderately good plein air landscapes, though both frustrated me and I was wishing I had oils. Water colors and pen are so difficult when the light is bad or there is too much movement.

Next we went to Uncle Ed’s funeral. He lived a grand life and died at 95 with his 4 kids and wife by his side. He knew it was coming and they told me he was joking right up until the end.

We saw him in the spring and could see the natural slowing down that happens at that age. Ed was a huge presence in my life, and our kids too. I guess that’s what an uncle should be. We were lucky to have him just a few hours away. Even as we had grown kids of our own we continued to visit Ed and Mary Ellen. Their new earth home was right next to one of our favorite climbing areas, so we naturally stayed at their house from time to time. After my parents passed, Ed and M.E. were as close as I could come to still having parents. Staying at their house was almost like being home. They had great grandma’s old dining room table, featured in over a hundred years of our family history. My mom was also named Mary, so my dads sister Mary, who Ed married, was early on called Mary Ellen (ME) to cut down on confusion.

Back when I was a kid, we lived 15 minutes from grandma. All her kids and grandkids (me and the cousins) would gather every holiday…which at least meant Thanksgiving and Christmas, if not more.

Dad had a ping pong table in the basement as long as I can remember. I’d play with my friends, and I’m sure we played a bit in the family too. But dad and mom were never really that into the game. I know my cousins played a bit, definitely remember a few of those games. But the real player in the family was Uncle Ed. He must have been about 50 when I first became aware of his talent. I had been slowly growing into my game through my awkward teenage years. Meanwhile, he played at work with the guys on the Prosser cattle station where he worked as sort of a scientist slash cowboy. They tested different feed on cows and put plastic windows in their stomachs to research how food got digested.

I was gradually growing up and becoming a talented player while he was hitting the downward slide of his 50’s. Ed was very, very good…but I was young, fast and learning quickly. * Old age and treachery will always beat youth and exuberance. * – David Mamet. The family used to watch me and Ed play. We’d have 20 people down in the unheated basement cheering us on. They were epic times.

But then I decided to drop out of high school with only 2 credits needed to graduate. I wanted to march in the streets protesting the Vietnam War. I felt it was my duty to ‘go back to the land’ and live naturally…to stop consuming…basically stop pursuing the American Dream. I cut down 20 slender fir trees for tipi poles, sewed the tipi and began living the dream. I had a part time job as a printer, but spent most of my time embedded in the hippie culture of 1970 Olympia. When the tipi got too cold I’d hitchhike to California and live on the beach off the kindness of strangers. Dad had wisely kicked me out…can’t blame him looking back…I would have done the same. I spent 3 years off the rails before I came to my senses and went back to college.

There was a period there where I was estranged from the family, for obvious reasons, living in my lonely tipi. But dad felt bad. He knew I was a good kid, just a bit lost. He called me up to invite me to Thanksgiving Dinner. I thought about staying pure sitting around my campfire in my lonely tipi, eating my lentils. But then he said that Uncle Ed would be there….and wouldn’t I like to play some ping pong?

Ed, through the magic of ping pong was able to reach out and make me feel included. I’m not saying it was a turning point, I really had to hit bottom before that happened. But it was a huge step in the right direction…and boy, did we play some wicked ping pong!

Since we moved to town Sue and I play ping pong twice a week at the community center. We usually have 3 tables playing doubles for a couple hours. It’s one of the highlights of living in town. It’s social, it requires a lot of skill, and there is a ton of raucous laughter. Trash talking is expected. I really miss it when I go on trips.

My other town sport is unicycle which I do almost every day. I’ve been pedaling my unicycle in the local baseball stadium parking lot. But the last two times I went there they were either having a game, or paving the parking lot. I like it there because, unlike the tennis courts and those annoying tennis players, the stadium lot is almost always deserted, other than a few skateboarders riding the public ramps. I’m just another weirdo wearing wrist guards.

Plus the lot is big at about 3 city blocks across, and there are posts and walls for me to lean on as I start. I need that help because I can’t get on the uni without a wall. So, to make a long story short…I’ve been having wind problems. Meaning, I run out of breath and have to stop to rest after crossing the parking lot. I’m not just winded…I’m literally heaving for breath, like a horse that just ran a race. It’s awful. My heart rate never gets above 145, but that rate feels unsustainable and I have to stop and rest until it calms down.

I can go back and forth across the lot just fine…usually. But with all the stops it takes 45 minutes to go a mile. Sometimes I push it up to one and a quarter. The wind problem has been very frustrating. I was plateaued for months. Oddly, my climber friends and Sue noticed that I was hiking uphill faster, so my wind is improving…just not noticeable to me on the uni.

But, today. Today there was another darn baseball game…the nerve of those guys! Don’t they know I need that lot empty?!? So I drove to the tennis courts where I first learned to ride. It was a Sunday morning, in late September and no annoying tennis players were in evidence. Sweet!

I suited up with my knee, elbow and wrist pads and launched off the fence inside the 3 court enclosure. I nailed the launch and was quickly heading for the first narrow opening between the end of the far net and the outside fence. I sailed through the gap with only a slight wobble and accelerated out into the open court headed West.

As I ride I often try to focus on what I can do better in the moment. Like:

And to my great surprise, I was able to do all those things at once! I finished a loop from West to East and back to West. I was closely monitoring my wind and remaining power. All systems were in the green and I decided to go for another lap…something I’ve only done once before. I finished that lap, checked my wind and thought, hell, let’s set a record, a personal best. I kept going…and going…and going. I did so many laps I lost count. I was in the zone and the damn, hateful, horrible excuse for a bicycle felt (almost) like a normal “I can ride this forever” kind of two wheeled bicycle. Except it was a unicycle.

Damn. I felt like I could have gotten on a real bike trail and put in some distance. Which has been something I’ve been wishing for ever since I got my first Good Will unicycle 6 months ago.

Rather than start a new post, I’m going to tack onto this one. And by the way, I rode my uni 2.25 miles yesterday, and 3.3 miles today. I’m really liking the views down on the waterfront. It’s better than either the stadium or the tennis court. My wind has kind of broken through a ‘glass ceiling’ of sorts.

I spend far too much time on a climbing website called mountain project. It’s more entertaining than netflix when I don’t feel like drawing the evening away. And real conversations happen there…along with the usual angry rants from keyboard warriors.

I replied to a rant about dogs off leash at the climbing crags. It’s a problem that is not easily solved. Anyway, I wanted to preserve my words in case mountain project goes down. Here is my reply:

I’m late to the party. 15 pages about dogs, and people will still bring their unleashed dogs to the crags. It’s a thing.

Sue and I didn’t feel the need for a dog during the nine years we climbed together before our first kid. We were happy with each other, no fur needed.

We used to see all these hard core climbing women in their late twenties, mid thirties who had chosen not to have kids. But they often had a dog, and would treat it like a human baby. I’m no shrink, but it made me wonder.

When my son was six months old, we went to a huge palette fire in Hidden Valley, Joshua Tree, New Years eve. All of those women (and men) were there with their dogs. They were super strong climbers, crazy devoted to their fur babies. When they saw we had brought a real *human* baby to the bonfire, they all wanted to hold him. Sue walked around with Clint, letting all the women coo over him.

I stood there watching the scene. When they were holding Clint, they completely and totally forgot about their dog. What, I have a dog? They seemed, in the moment, like they’d make great human parents, but they had chosen the climbing life and a dog. The longing on their faces as they held my son is still a vivid memory 37 years later.

Oddly enough, both of my kids got dogs in their twenties, and then had their human babies. Nobody listens to old dad

Photos of Sue and I with Clint that year are here