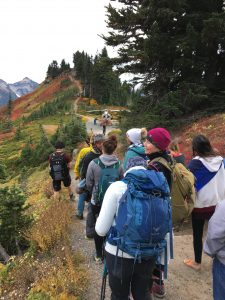 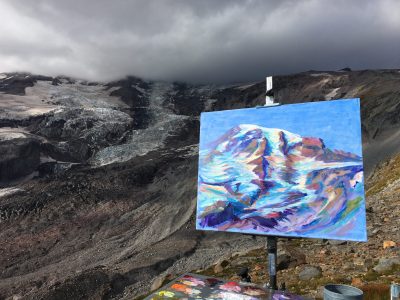 For the last 3 days I’ve been painting the morning light at Stadium High School. I had a guy stop his car, lean over and roll down his window this morning: “Hey, I’ve been watching your progress. It gets better and better every day you are here!”

I had a couple with a baby carry some bags of garbage down to my dumpster. They were both very young and handsome. She was totally enraptured by my painting, telling me it was “So Awesome!!” Huh…does an old duffer good to hear that from young people.

Today there were strikers, and I thought they might walk down to the dumpster where I am painting. But they were busy holding signs…working basically, with no time to check out the scenery. The painting is  complicated by the fact that there are a dozen cars in the parking lot. Behind them are some very slender ethereal trees. Both are equally hard to paint. I have a painting from this viewpoint dating to 1997, and I’m tempted to use it for the foreground parking lot. It has no cars, and better landscaping bushes than are currently in place.

I exchanged a couple emails with my old friend George today.  I’ll write more about that later. Climbed at 38 with Lisa and Sue on Thursday. I have a lot of memories of the Far Side. I’ve climbed all of those so many times over the years with a variety of partners, from Dave to Clint, Craig, Marty, Christine, Sue and Lisa. The climbing is fun, and not difficult, starting around 5.6. After climbing the runnout monsters at Darrington, 38 felt very comfortable.

« Darrington Climbing | A wedding, a helicopter, two paintings and 3 bears »

V. and I drove up to Darrington for Labor Day weekend. We climbed Silent Running and Big Tree 1. SR was scary as usual until we warmed up to friction  climbing.  I backed off pitch 2, and even V. had some trouble but got up. By pitch 3 I had warmed up and V. commented that “Mark, you got your mojo back!” After that it was all gravy. On pitch two, it’s helpful to go up the flakes on the right. There are 2 cams up there  before the step left. And after that it’s bolt protected by two close bolts. Pitch 3 was lovely as always, close bolts with a few cams up to a yellow at the top.

Pitch 4 is runnout maybe 50 feet max, but the climbing is 5.4 jugs, so nothing to get worked up about. The chickenheads are delightful, similar to Double Dip at jtree, but easier. I think I could lead the entire thing now. But it’s important to warm up on the routes under the great arch. No reason to head up a 6 pitch route of friction if you are rusty. Under the Boardwalk, left of Cornucopia looks like a super fun 5.9. We scoped it out while rappelling down from Big Tree 1. Looks quite nice for at least 2 pitches. There are a few runs, but only on easy stuff. Bolts are where they are needed.

Darrington is a unique climbing area. It has a distinct learning curve, but once mastered, the joy of flowing effortlessly up steep featureless slab is magical.