Clint got a dog 7 years ago when he bought his house. He brought Wyatt over this week and I set up my bright video light to shoot some reference photos. With the bright light I was able to shoot them at F-8. My 24-105L lens has image stabilization, which meant I was shooting at 1/125 of a second with ISO set at 1600.

For decades I swore I would never draw from photos…but recently I’ve made an exception for animals. No matter how much you pay them they won’t sit still. The statue and the shoe were done from life. Last is a capture from Paradise, where the snow has been falling during the gubmint shutdown.

So when I was at a friends house and she showed me her dog drawings it occurred to me that I should get into pet portraiture. Everyone’s got a dog, except us, so why not do some dog portraits? I took some photos of her dog, got out my india ink dip pen and went to town. This is my first dog drawing ever: 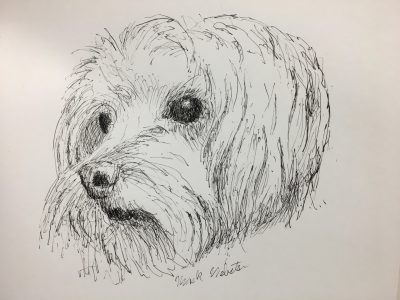 That was so much fun I took a picture of my sons’s dog while we were dog sitting during their recent Hawaii trip. I used a dip pen some, but mostly I used Pigma markers. Those are disposable felt tipped markers that use permanent India Ink. They are lovely when new, but they only last a few drawings. 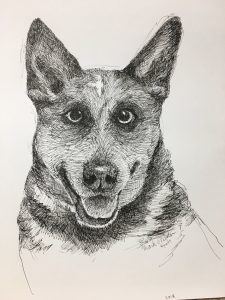 I loved the look of pen so much I decided to invest in some decent tools. After some online research I settled on a rotring isograph and ordered 3 from Germany. No one carries these high end pens anymore. Back before CAD they were the standard for architects and Graphic Designers. The darn things can last for up to 30 years. The only people using them now are Illustrators.

Anyway they took forever to arrive so I went down to the art store and picked up some high end permanent ink ballpoints made by Pentel. They are the Slicci model and come in widths from 0.25 to 0.8mm. Those things are quite nice! Super sweet thin lines, and they almost do a fade when used fast. I got a pack of 4 different sizes for $13. They seem quite a bit better than the Pigmas. It’s about time someone improved on the disposable Pigmas…they’ve had a 20 year run.

I wanted to do some work from life, instead of photos so I started this portrait today using the Pentel ballpoints. I hope to finish it tomorrow…or the next  day. I’m so enamored with these tight little ballpoints the rotring technical pen may be a let down.  Still, The refillable rotring’s have the ability to use white and black ink, which could be super awesome on gray paper. I hope to learn that technique in the coming weeks. 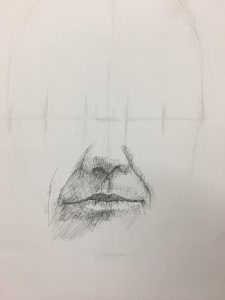 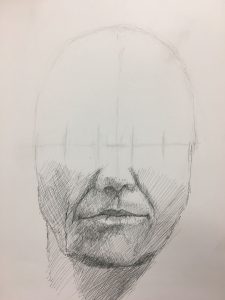 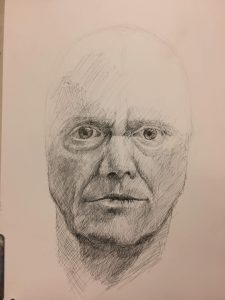 I love the way pen gets you in the zone so quickly. There is no erasing with pen and ink, so it forces clarity. And the 0.25mm tip is so light and wispy it’s almost like drawing with a 4h pencil. The lines are insignificant when laid down lightly so you can almost sketch with abandon. They don’t have an impact until you really lay in some hatching.

I did do my standard egg shape under drawing in a 4h pencil before starting in with the pen. No sense living dangerously.  I was careful to measure out the center of the skull, the one quarter height of the upper lip, and the 5 eyes across measurement to get the nose and eyes looking real. You can see those faint 4h lines marking out 5 equal spaces across the eyes level. This will be a fun one to finish.