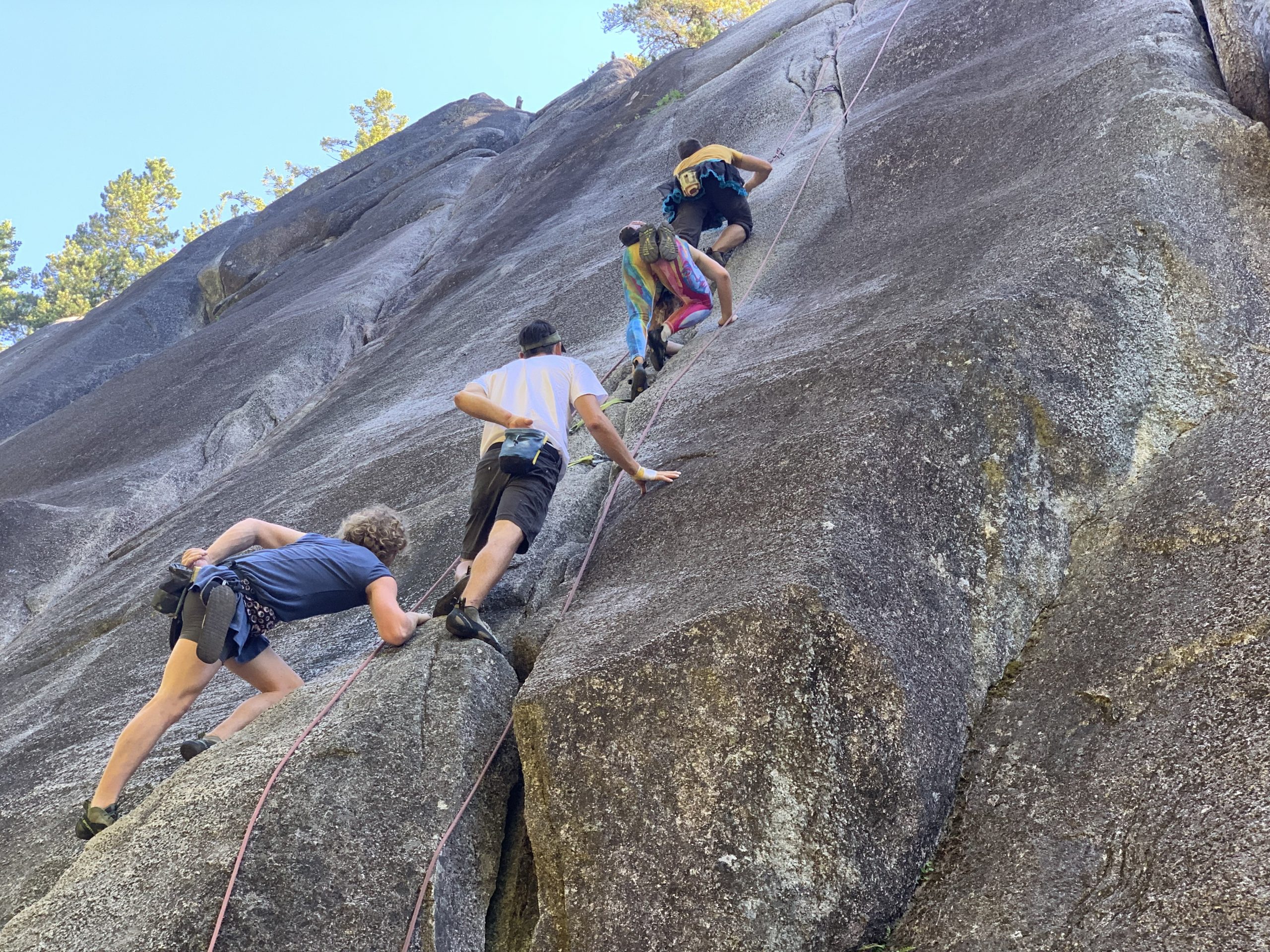 After a 3 year absence I finally got back to Squish. Though crossing the border was not without its drama. We had complied with all the arriveCAN headaches, which included uploading your vaccine proof via a photo, and scheduling your arrival time…basically making an appointment to cross the border. We also had to give them an address where we would be staying.

A Canadian address is problematic because we were dirt bagging it and in reality had no idea where we would end up finding room to camp. But I told them we were staying at the Chief, since it has a street address for the arriveCAN form and does not allow reservations…which simplified the paperwork.

We sailed through the border with no problems until the very last moment when the border guard said:

“You have been randomly selected to take a Covid Test. Here is your kit.”

“How is that going to work?” I asked.

“Oh, it’s super easy, you just follow the instructions and schedule a FedEx pickup. You have 24 hours to do it.”

We drove north with a growing sense of un-ease. Our first priority was to get a camp spot. It was Friday morning at a world famous climbing area in a perfect weather window with rain to either side of our 5 day stretch. Both the Chief and Mamquam were fully packed with climbers in all manner of vehicles from $200,000 Sprinters to beater rusted out Chevy vans, not to mention a few packed to the brim Subarus.

Squamish in good weather is the place to be and any climber worth his salt within walking, driving or flying distance was already there…many for several month stretches. But I’ve been climbing there since 1978 and I know a few of the secret camping spots. Privacy concerns prevent me from sharing online…but I will say that we headed up towards Whistler and got lucky.

After putting up a tent, we headed for the Smoke Bluffs and the Black Zawn. I’d planned to deal with the Covid test in the evening…but of course we were far too tired after the long drive and a day of climbing. On the next day, we did a dawn start to get a parking spot at the Bluffs.

James cooked while I battled through the long process of navigating a very badly designed website to set up a Microsoft Teams meeting at 11 AM for the remote home Covid Self administered test. They want a nurse watching while you swab.

We climbed a few fun routes at Neat and Cool before I logged into Microsoft Teams. I wasn’t sure which log in to use. I have a backup account with another email address, but not the one I used for arriveCAN. I wasn’t sure how tightly the databases were integrated. Plus, I haven’t used Teams in 4 years. It sucked back then even on a computer. It was even worse on a smartphone. It’s the kind of thing that is supposed to be easy, even for a beginner…but it’s not.

By some miracle of the computing gods the nurse and I were able to see and hear each other. But it immediately became apparent that my extended Verizon Canada coverage plan was throttling my data. That would have been survivable, but her accent was very strong. They had clearly offshored the work to a place where people work for pennies and can barely speak English.

I had assumed that she would walk me though the whole process, starting with opening the sealed serial numbered box. But due to her strong Pakistani accent and the bad ‘FaceTime’ connection, she had to repeat every instruction several times. I was sitting on a ledge in climbing gear and didn’t know I needed a pen to write with. James had to hike over with my pen…which was fortunately on my key ring. I got a few lines penned in and she had to move on to her next appointment. They only schedule 15 minutes!

We went climbing after that up at Ronin’s corner…which, by the way, is still in the sun at 3! It was too hot to lead without incurring rivers of sweat. Our plan to escape the inland heat by climbing on the seashore at Squish had backfired. Not that I’m complaining. It was so lovely to be back on the exquisite Canadian granite.

We knocked off at 4, drove into town and I once again waded through the awful website to schedule another appointment for a home test. Despite a 4 bar signal the FaceTime experience was even worse. And his accent was abominable. I even asked him if there was anyone there who could speak English more clearly…because even when he slowed down and repeated his words multiple times, it was as if he was speaking gibberish. By that time James was in the car. Even with both of us guessing at his meaning we were getting zip.

Prior to this latest meeting I’d done some research and discovered that there is a $5000 fine if you don’t complete the test within 24 hours of crossing. Or maybe it’s by end of day the day after you arrive…I read conflicting reports. Either way, with our facetime crashing repeatedly, Verizon throttling my data, my RoboCall software intercepting his phone calls when FaceTime crashed, we were having a first class sh$tshow. I was looking at a $5000 fine with a deadline…plus he was running way over his 15 minutes of allowed time for our ‘appointment’. I think he even mentioned that we were out of time…but that he was going to make it work, even if he couldn’t see me.

I was like, you mean we can do this by phone…really? You don’t have to watch me on video?

So that’s how it ended. Despite all the communication nightmares, we managed to get a swab into the packaging and I dropped it off at Shoppers Drug Mart in Squamish. They were familiar with the border sh$tshow and had a form to accept my test kit.

My 24 hours of stress were finally over and we spent the rest of the trip enjoying ourselves. We spent a day at Octopus Garden, a day at and above Klahanie Crack, a day up at Chek and maybe somewhere else? My favorite lead was Edible Panties. And no, I don’t name these things. Climbers have a long history of ribald route names. It probably stems from the fact that these routes were put up back when women climbers were thin on the ground.

Sue and I would be out climbing with a bunch of sausages and she would literally be the only women in a crag filled with 20 guys. This used to happen all the time. It worked in my favor when I’d call my buddies to ask if they wanted to go climbing, they wanted to know if Sue was coming.