When I was on vacation last month I enjoyed being off the grid. It was super nice to live in the moment and forget about the world outside our little climbing and painting bubble down in Utah.

After I returned, I tried to improve the paintings I did down there. But it turns out I couldn’t do much for them in the studio. I seem to be an on location painter, period. I tried to breath more life into them…but the oxygen they need is down in Moab, not in my studio. I did at least try not to make them worse. And I only worked on one of them, but eventually gave it up as a lost cause. Perhaps I’m being too harsh on the painting, I tend to do that. I’ve had paintings  sell that I thought were broken.

I like to thing that my art is an activity that transcends time. One of the reasons I love making art is that I am creating something that lives all on it’s own. A good piece of art, whether it is a book, a song, or a painting, has a life of it’s own. We are creating beauty where beauty did not exist before.

There is a reason why drawings still survive from the 1500’s and earlier. Everyone who sees them recognizes the beauty, and treasures them. Now this is not to say my art is that good. But perhaps someday it will be, if I keep learning and improving.

I have one of my great aunts paintings on my mantel. She painted it around 1910, and it has been handed down through the family. I love the way art lives on it’s own merits. If it’s pretty, people will hang onto it because it adds beauty to their lives. If the art is bad, it gets thrown away, and that is as it should be.

I also have tons of old photos that have come down through the family, including some of my great aunt, the painter. But the funny thing is, I have no use for them. They don’t add any beauty to my life. Her painting however is lovely. Art is cool, and I feel very lucky to be a painter.

I have all my recent paintings up on my landscapes page on my main website: my landscape painting page

I have a lot of administrative work to do this quarter. We are planning more changes in our program. They will be good changes, and will help our students get jobs, but it’s a lot of extra work above and beyond my normal full time teaching job. Still, I shouldn’t complain, I’m happy to be working. It’s fun learning new things. 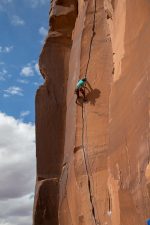 I’ve been back from climbing at Indian Creek for 10 days. Daphney and I had a great time.  We spent the first day with 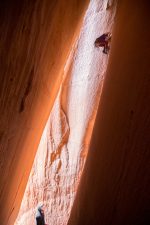 Craig, who was on his way home from working in San Diego. That first day we climbed at the Donnelly crag. I tried to lead a 120 foot route called “Generic Crack”. The rack is one red, 9 yellows, two blues and a 4. I was fresh off a 24 hour drive on two hours of sleep…I bailed early. Craig and Daphney both led it clean. We also did the Cave route…or rather, they led it, while I took pictures. It was all reds, which is my worst size. My hands don’t fit in red cracks.  I found out later that, for guys with big hands, learning to master reds is the hardest thing to learn at the creek.

That was Saturday. Sunday we went back to Donnelly and climbed a few things we hadn’t got to the day before. She was super tired from on sighting 5.11’s the day before with Craig. We decided to take a rest afternoon. I offered to teach her how to oil paint.

We each did a nice painting of this rode side buttress in the afternoon light. It was her first oil painting ever and she did a fabulous job! We both started with  monochrome wash using Raw Umber. It’s a lot like using pencil, except it’s oil paint. You simply have to do a value study. I got bored with mine and broke out the color to make what you see here. The light was flat…no cast shadows, so the painting turned out almost abstract. Normally I hate painting in flat light, but something about this little painting works.

That night…might have been Sunday or Monday, it poured. We woke up to soaked sandstone and decided it was a good day to drive to town for some shopping and showers. We stopped by to see a hay bale house she had helped to build a couple years ago. It was a standard Ranch style house, one story, but the interior was all done by hand using hay and mixes of special mud.  The floor was not concrete, it was mud mixed with hay. You aren’t supposed to ever mop it. The owner can’t hang pictures on the walls with nails because the walls are hay bales covered with 2 inches of adobe plaster. I heard that this style of home construction can outlast standard buildings.

We still had time to kill before some of her other friends got off work so we hiked up to the North Fork of Mill Creek where there is a cool waterfall. There were some folks with a couple slack lines, but we ignored them as we set up our easels to paint. I decided to do this one with palette knife.  It was once again flat light, even raining a little bit but we found an overhang under which to paint. I was fully expecting this one to bomb. I still don’t know what to think of it, but it feels very fresh and lively. I use instagram to reach out to other like minded artists. When I posted this little waterfall, I was shocked to see it rack up more “likes” than any other painting I’ve ever posted.

We hung out with Ranger  M and his girlfriend J when we were in town on a rain day. My favorite route was “where’s carruthers”. It’s a 10+ left of Scarface that I led clean after following on top rope. As Daphney said, “Learning to accept top ropes when they are offered is part of how you become a creek climber”.

I did 4 paintings down there, all in a three day period where the rains came in at night. We drove to town, and I painted a waterfall up a canyon outside of Moab. When we woke up, I was ready to climb, but she said the rock needed another day. When I found out Delicate Arch was half an hour away, she went hiking and I went painting. I did two paintings that day.

I’ve had  the first one on my easel for the last few days. I’m trying to bring it to life. A lot of people liked it, perhaps more than any other painting I’ve done plein air. But I didn’t like it. I felt it was weak in many places. I’ve been slowly building in beauty, but it’s such a delicate process. The light is extremely tricky. It’s all reflected reds and tans. I’m trying to work from the photos I took as I did the plein air work…but I really miss the real light. Cameras don’t capture what I need, so my colors end up being guesses. Still, I was guessing on location, and it’s good practice to work in the studio.

Daphney gave me some great advice for the creek that applies to painting as well. “Forget about all your preconceived notions of how to define sucess. Do the best you can, and if it can’t be perfect, it’s fine to fail. You learn stuff either way, and it’s all fun. We are out here in this beautiful place, living the life we dreamed of. Who cares if the route was climbed perfectly, or if the painting is magnificent. Life is about learning and growing.”

Another cool route was mudslide 10+ over at Optimat0r wall. I followed D up Soulfire 5.11+: 130 feet of reds, capped by 3 greens near the anchor. I did quite well, only hung 3 times. I can’t wait to go back. It is the best crack climbing area I’ve ever seen.

« Crossed over to the dark side | Facebook time out »