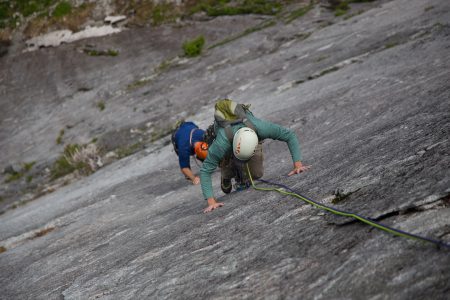 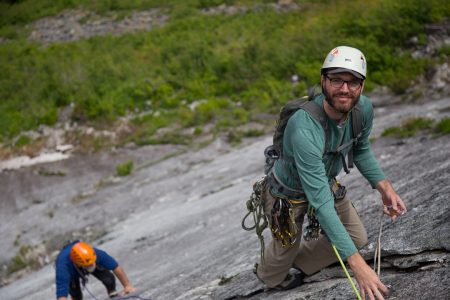 L. decided to start leading this last Memorial day weekend. Her first lead was up above Penny Lane where she led  a short 5.8 crack left of the long 5.8, to the right of Split B. Next she led a 5.6 down to the right of Neat and Cool.

Next morning she led Laughing Crack. It is a long and lovely 5.7 finger crack on a leaning over slab.

Twenty feet up she realized she wasn’t in the mood and started complaining about how her gear was bad. I had been teaching her what a good cam looked like for the last couple days. We had been placing and replacing cams on the ground while I explained the correct lobe angles.

So there she was, 20 feet up up the cliff. It was difficult to climb back down. She was like the proverbial cat stuck in the tree. It’s easy to climb up, not so easy to come down. She had pretty much mastered cleaning anchors…I’d taught her that 6 times over the previous two days. Her thinking was that she could simply keep going up to the good steel anchor bolts and lower off.

Instead of coming down, which would have been relatively safe, she placed more gear, swore it sucked and climbed higher. At about 60 feet up she was still cursing her gear but by that point her hands were sweating in the 84 degree heat. She was frazzled, out of power, and in panic mode. Sue and I were sweating bullets and thinking worst case scenarios.

The rock always wins when you head up a cliff under prepared. She peeled off and took a  whipper. As she fell, I had enough time to think that this might be the last time I ever saw her in one piece. My wife started crying. However, I’ve caught a lot of falls over the decades and simply locked off my GriGri + belay device, waiting for a piece to stop her. A Metolius yellow 4 cam TCU caught her fall.

She had slid down on her hip, which wouldn’t have been bad. But because she was wearing running shorts she got an ugly road rash. We call that kind of fall a “cheese grater”. More cursing ensued, but she eventually calmed down. After realizing she was perfectly safe, and the gear was good, she got back on the lead and finished out the route. She threaded the anchor and lowered down.

When I cleaned the route, I was surprised to see that 90 percent of her cams were perfectly placed. She had mastered the art of cam placements in the nick of time. I think her trash talk about their quality was simply her tendency toward perfectionism…which she got from me.