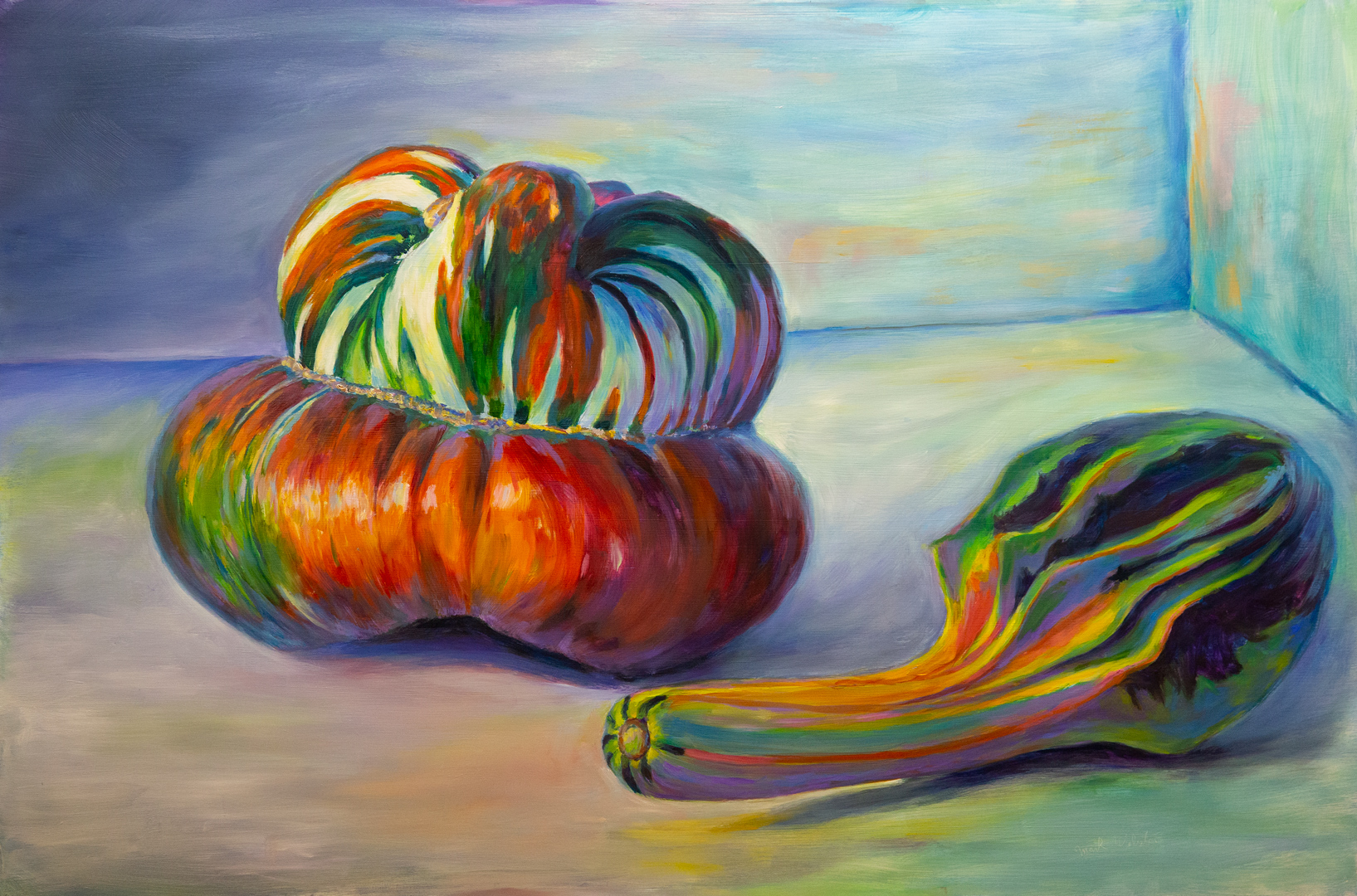 I am really liking having a painting going in the studio (our heated shed). It may be my best turban squash painting ever. And even if it’s not, it’s given me a lot of satisfaction. I haven’t painted large since my 30 inch water colors in the early nineties. This one is 24 x 36 inch. When I’m out there painting, I get a deep sense of peace, like, this is where I should be, and what I should be doing. I know it sounds like psychobabble but my mind gets very clear and I enter a “zone” where it’s just me and the painting. Everything else is forgotten. I’ve missed this…a lot.

Because it’s so large, it has a presence that’s undeniable. It seems to say: “Like me or hate me, I’m big, and I’m here to stay!” But speaking of that…this one is painted on 5 ply cradled maple plywood. It’s huge, it’s heavy and it will be difficult to store. Here I was thinking I was so clever to cradle a couple 36″ boards.

I’m realizing there was a reason Van Gogh painted on large canvases. He could take them off the stretcher and roll them up. When Vincent died, his  brother found a shed full of rolled up canvases in perfect condition. They make for a very compact storage option. Even some modern painters prefer to work on unstretched canvases. They tape them to boards for plein air work. If they turn out, they can be stretched and mounted later. If they don’t turn out, they can be painted over like any bad work.

To that end, I just bought 3 yards of medium weight canvas for $36. I’m priming it for oils as we speak. Perhaps I’ll do some big jtree paintings. With this studio work, I should be warmed up enough to do some good work down there.

Last weekend we saw a big storm coming. The passes were already closing down. But we have a four wheel drive truck with brand new snow tires and decided to drive up to White before it shut down.

I-5 was terrible in the dark with heavy rain in rush hour. We didn’t know it but having a full size truck means we are above much of the tire spray coming from ahead. That almost makes up for the scariness of driving a bigger truck.  The thing is so big I haven’t learned where it’s edges are. Our RAV4 and Tacoma are much smaller and easier to drive. Once we got past Packwood there was no one on White Pass and we motored up toward the top where the last 12 miles was in snow. Our new Hakkapeliitta R3 tires seem very good. Not a single slip, just like their 10 year old studded cousins on the RAV4.

At the summit we turned into the ski area parking lot and were pleased to see 8 other vehicles camped in the snow. They varied between a full Grayhound bus sized RV to a 5th wheel, a popup on a Tacoma and SUV towing a small trailer with a wood stove. We opened the gate on our Canopy, shell, topper…whatever it’s called and crawled in while the snow fell quietly outside.

I lit our Mr. Buddy heater and it quickly got cozy. When I crawled in my sleeping bag, I disconnected the hose from the tank down on the ground. I brought the hose inside but left it connected to our heater. In the morning, I connected the hose to the tank and lit the stove while it was sitting in the canopy, with the upper door open.

I’d assumed the connections were tight as I’d not loosened them the night before. Bad mistake!!! After a minute of normal burning, I got a football size explosion of propane at the stove connection. It burned wildly for a long 15 seconds as I leaped out and shut off the valve at the propane tank. The flare up shut itself off automatically probably due to the little propeller spinners in the fittings.

It turns out, the hose and stove fittings at the propane filter had loosened. I’m wondering if it was because freezing things causes different metals to contract at different rates. For example, to loosen stuck bolts in an engine block, you heat them with a torch.

Anyway, that was a wake up call. Never assume your propane fittings are tight…always check, every time you start it up! We could have burnt down our new rig.

To make matters even worse, we skinned up to the summit and found that the snow was awful. Cascade Cement is a term used to describe snow that is so deep and thick that you literally can’t ski through it. Still, it was a fine adventure, great to get outside and do a little skiing.

« Painting and the election | In the studio »

Painting and the election

It is squash season and we found a great one in Leavenworth. None of my squash paintings have ever sold (one exception) so I decided to paint 24 x 36″. I’m operating under the go big or go home principle.  I painted for 5 hours the last three days  and made some good progress. I’m not sure where I’m at with it. On the one hand, it’s well drawn, and it’s big…so there’s that. But the composition and colors could be better.

The challenging part of being a rusty painter is that nothing I do can be good.  I can’t jump start my talent with will power. It takes time and practice. By nature, everything I paint will be a train wreck. And yet, the only way to get better is to paint train wrecks…a lot of them.

I  could post my work on Instagram, where 20 artists would like it. And that would be my “pay”. But I like to think that I’m smarter than that. Van Gogh didn’t have social media. He got good because he believed in the process.

We bought Nokian Hapelitta R3 tires for our truck today. Now it’s as stable as our studded RAV4. I didn’t want to put the darn thing in the ditch during a snow storm. It’s painful to invest in rubber…but that is the nature of owning cars: you have to maintain them. And a new one has to be brought up to snuff. Now it can go anywhere, snow or not.

Biden may have got elected and there is a lot of celebration on the news. Trump did a few good things I didn’t know about. Clint says he got money for the National Parks.

But his extremely bad speaking style made him seem far more of a monster than he really is. With Trump as the face of America it was very hard to feel any patriotism. As soon as Biden was elected this showed up on youtube. I haven’t felt a speck of patriotism in years…but this  made me feel some tingles:

It puzzles me why we couldn’t find anyone better than Biden. I mean, with all those younger politicians, isn’t there someone who could have risen to the top? Kamala is amazing. She has it going on. And perhaps Biden does too. It’s just hard to get excited about him. Nevertheless, at least he seems to have integrity, and his speaking style is ok…lightyears ahead of Trump.