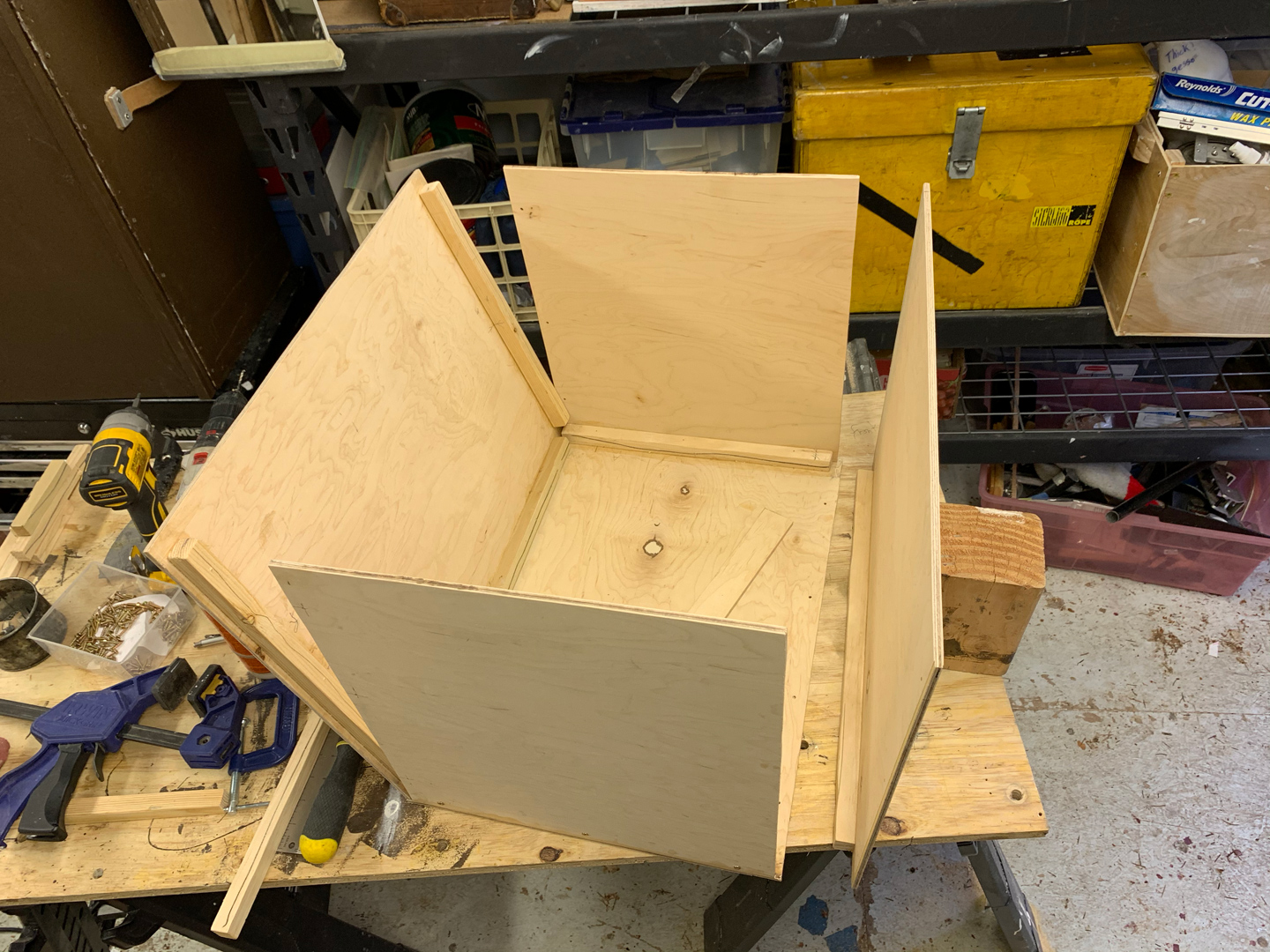 I bought a new rubbermaid bin recently and it only lasted 3 months. I suppose it might have frozen in the bitter jtree snow storm, but still, I’ve had them last 10 years.

The key to a tight box seems to be to cut  the bottom and long sides same measurements. Then cut the short end pieces 0.5″ shorter. Assemble it with the short sides attached to the longer bottom first, using temporary shim pieces for alignment. It’s kind of a no brainer…but it took me 4 bad wood boxes to figure this out.

Our new custom contractor canopy from canopy-world.com won’t be here until October-ish. Our trucks been sitting since it’s useless for camping without a storage area.

I decided to build a DIY tonneau cover from 3/4 inch plywood. I can re-purpose the plywood later into ourcanopy bed…and it was a fun project. Total cost was around $200.

Because I built it on a Sunday, the metal shops were closed. I mickey moused the C channel with some drilled square pipe cut in half. If I was going to use this long term I’d cut the post 2 inches taller and mount proper 8′ long C channel directly to the posts, thereby skipping the 2 x 2 and all the leaks inherent in my current system of partial coverage C channel.

There was one major problem. Once I started measuring for the proper panel widths I discovered that the post holes in the bed are not in a straight line. They curve. This made the C channel curve caused fit problems. I solved that by redrilling the last post off center to true the 2 x 2.

Back from a week at the Leap

I’ve been having some challenges finding partners who have more one or two days available. But bless the stars above, out of the blue I heard from James. We’ve been on many the long trip over the 14 years since we took that first Jtree trip with Austin and Brett.

We left on Sunday around 10 and arrived at 1pm the next day. We stopped to sleep near Shasta Lake in a city park outside of Redding. It was sketchy, but at least there were no signs forbidding camping. I might of slept a couple hours….kept worrying about getting busted.

We did some exploratory hiking the next day. I’ve been there 3 times but could barely remember anything other than Bears Reach, Corrugation and Haystack Crack.

We ended up climbing all of those plus East Crack, which is a much safer start to Bears Reach. We discovered a ton of stuff over on the Hogsback. Ham and Eggs was a standout with 4 pitches at 5.6.

I backed off Corrugation Corner 40 years ago but got it clean this trip. It’s a 5.7 that feels like 10B due to exposure and runnouts. 50 year old bent pitons are considered ‘good protection’. The trad ethic is in full swing down there. They don’t even allow bolted anchors or rap stations.

I’ve had a few nibbles on my blue car. We parked it in front of the house with a for sale sign. Someone test drove it today and seemed to like it.