Preparing for a show

Preparing for a show

Two weeks ago I needed 6 new frames for a one day show. Because I couldn’t afford to buy them I reasoned this was a good time to learn to make frames from scratch. Usually I go to Michael’s and buy pre-made frames. I paint in standard sizes  of 9 x 12, 12 x 16 and 16 x 20 precisely because those are easy to find pre-made for under $50 each. However, if I could figure out how to make frames from raw wood, I could get the cost down to five dollars a frame.

I bought 1 x 2 pine from Lowes and drove over to my son’s house to borrow his table saw. To put a picture in a frame, the frame has to have a slot in the bottom. It’s called a rabbet, and allows the frame to overhang the picture, covering up the edge of the painting. You basically have to take a notch out of the bottom inside corner, and it needs to be about 3/8″ inch deep.  This required two long cuts on each board, that met in the middle exactly.

With the rabbets cut I took the  boards to my house where I have my son’s other saw, a miter chop saw. I cut the 45 degree angles then glued and nailed them together. At the time I didn’t have corner clamps and chose to use a very old system of hammered wedges  to pinch the corners together for gluing. Trouble was, hammering in the nails would knock loose the wood wedges. And if not that, then the wedges wouldn’t hold the corners true. The trueness problem 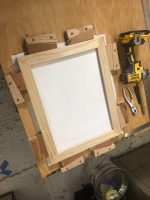 was related to me not cutting the wedges square. I cut them with a hand jig saw, which wasn’t accurate. I did 6 frames with those wedges, but they  needed a lot of work afterward. I had to sand off alignment issues of up to 1/16″ on the corners, plus  a lot of wood putty work to fill gaps.

After assembling I had to stain them in 3 coats. And this was all while teaching during the week. I calculated afterward that I worked 8 days straight, up to 16 hours a day. At the end of that period I was so frustrated with the wooden wedges I drove up to Rockler woodworking in Tukwila and bought two professional framing clamps.

The show was Saturday from 2 to 6 pm. It was billed as a wine tasting event. They sold out at 270 tickets and it was packed from 2 to 4ish. I mean the room was literally jam packed to the point that people were waiting in line out on the sidewalk. They had 10 artists in 10 different businesses. The tickets allowed people to walk from location to location and get wine samples by presenting tickets which they received in a roll from the event organizer.

My 6 paintings were hung in a financial planners office. Both he and the wine dispenser guy were doing an awesome job of ‘working the crowd’.  Those guys were pro’s.  In contrast, I seemed to be most comfortable leaning against the wall, like a shy wallflower at the prom. It’s odd because I love teaching, and enjoy  helping my students. I did talk to some very nice people who complemented my paintings, and we had brief conversations about painting. But nothing sold. I talked to another very talented artist from across the street, and she confirmed the same experience.

As the crowd of tipsy wine tasters streamed by I kept thinking about the high alpine meadows or quiet vistas where I had created the paintings. I’m at peace in those places. But in a busy crowd of strangers in the city, where everyone is drinking wine and having fun…it’s hard to explain. If I’d had the money I would have bought a ticket and sampled some of the local wines on display, maybe loosened up a little. The wine guy who was next to me  runs a one man wine making shop in Lakewood. I asked him how he got the ‘gift of gab’ and he commented that it is a learned skill. Perhaps some day I’ll figure it out, but, that’s all water under the bridge.

I was thinking about starting another painting today, but yesterday I saw smoke coming out of the hood of our 1991 Corolla. I was afraid the poor old thing was going to catch fire and blow up. On popping the hood I saw a huge crack in the radiator. This will be the second time I’ve had to replace the radiator in that car. It’s about a 5 hour job for a back yard mechanic. Guess I’ll paint another day…