Crossed over to the dark side

Ever since 1976, practically a lifetime ago, Sue and I have been trying to master telemark skiing. We used to do it on cross country skinny skis with 3 pin bindings. It got harder and harder as we got older, natural I guess, since it is such a difficult and dynamic turn. It’s like doing squats, except while hurtling down the ski slope.

There used to be a mindset among my generation during the 80’s when we were young. We shunned the downhill ski areas. They were too crowded and too expensive. We would skin up into the mountains where it was free. There were no crowds, no chair lifts, and we prided ourselves on our hardiness. The only reasonably light ski back then was the cross country ski. We’d buy the ones with metal edges. They were light on the uphill, challenging on the downhill, but that was all part of the fun. 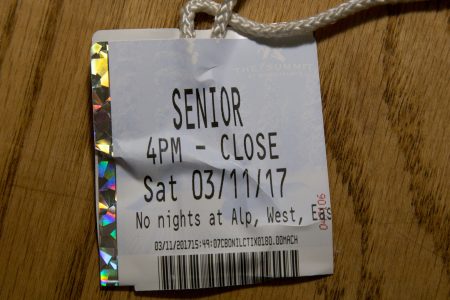 senior ticket to snoqualmie in the rain

When we had kids, they followed us up on their skinny skis, but they never really mastered the telemark turn. It requires a lot of practice. As they became adults, with money of their own, they looked at the learning curve in telemarking and went straight to Randonee skis. These are also called AT (All Terrain) skis. You can still skin up into the backcountry, but on the way down you lock your heels, just like a downhill ski binding.

Because they both have great jobs in the medical field, they were able buy downhill tickets and quickly mastered the difficult skiing conditions found in the backcountry. Whenever we took them out into the mountains (usually Paradise at Mt. Rainier), they would leave us in the dust.

5 years ago we bought new telemark gear, the first in 30 years. We thought it would be the ticket to skiing better. It did help a lot. When I bought my yearly downhill ticket I could ski all day on my telegear. That never used to happen on my skinny skis.

But I still can’t even begin to keep up with my kids. The teleturn requires so much practice that it is basically impossible to master without a season pass. And even then it’s not a super fast turn like you can do on downhill skis. 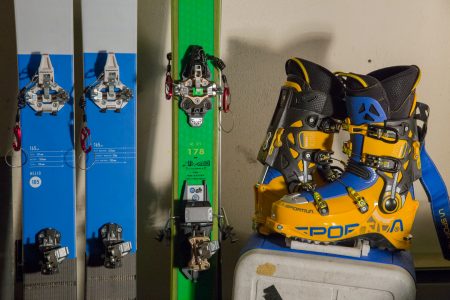 Long story short, Sue and I pulled some money out of savings and invested in new backcountry AT gear. They feature pivoting toes for skinning up, and  lock down heels on the bindings for skiing down.

I feel a bit guilty for giving up on my dream of being a great telemarker. There is an old saying about skiing: “Free the heel, free the mind”. It’s a bumper sticker seen at ski areas. Supposedly telemark skiing with it’s free floating heel is more of a zen experience. It is lovely turn, no doubt. But at our advanced state of decrepitude, I think we need all the help we can get.

There is another old saying in regards to telemark skiing. When you give up on telemark skiing, and buy skis with lock down heels, you have “crossed over to the dark side”. Still, now that I’m on the dark side maybe I have a chance of keeping up with my daughter. I just need to ride the chair a few times to get the hang of downhill skiing again.

Who knows, perhaps there’s hope for us old duffers. Sue got Black Diamond Helios skis, with the Dynafit speed Radical binding, while I got the Blizzard 95 Zero G skis, with the Dynafit TLT Radical ST 2.0 Binding. I’m dreading looking at my credit card balance after these purchases. But, these skis should be the last skis we ever buy, so it may be money well invested. We’ve skied on them once, in the rain, $40 lift tickets and they worked fabulous. It’s like having brand new downhill skis, which we haven’t had in 35 years. The bindings released correctly twice when I fell. I like the theory behind these Dynafit bindings. I did some research and they’ve been around since the late 80’s. They started as a modification of the Ramer binding, which was my downhill binding up until last week. Ramers had a “tuning fork” that would pivot on some pins. In  a fall, the tuning fork would flex enough to open, releasing the boot from the ski. These Dynafit bindings have a mechanism that reflects that heritage.

Adding a logo in a WordPress custom theme

Add a logo image function to your custom theme

Geek alert! This post is for the students in my WordPress class. There is nothing here worth reading if you are looking for stories about climbing or painting. END_OF_DOCUMENT_TOKEN_TO_BE_REPLACED 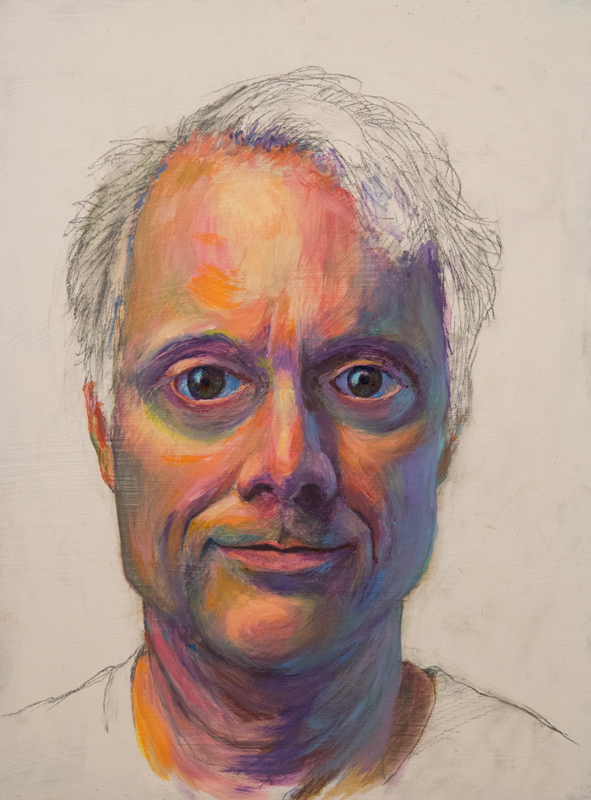 I finished another self portrait today. 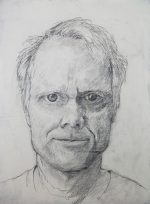 I will post in order, first to last, along with a few notes about my thinking.

I started in pencil, made sure it was accurate, then sprayed it with fix. This pencil drawing was about 4 hours of work.  I intentionally made the eyes oversized. Several months ago I watched a movie called “Big Eyes”. END_OF_DOCUMENT_TOKEN_TO_BE_REPLACED

I started another self portrait a few days ago. Pencil seemed like a good starting medium, but I got lost in the details and forgot it was going to all be covered up with oil paint. In hindsight I should have just done a nice pencil drawing and called it good. I’ve got some lovely Rives cold press 80# Illustration board that makes awesome pencil drawings. But I started this on gesso covered board, so an oil painting it will be. 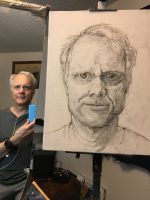 Self Portrait from mirror, pencil

I posted the pencil version on instagram  and my friend Kristi said I should leave some of the pencil showing, for an unfinished look. I’m not sure if that will happen, but I do like the look of the hair in pencil contrasted with the skin tones. I mean, if I wanted it photographic, I’ve got cameras for that. I’m trying to create art, but art is so hard to define.  It means different things to everyone.

Anyway, I’m happy with the progress, and look forward to spending more time on it. I’m still hammering out the color scheme. For example, what color is reflected light on skin? I’m using two lights: a shop trouble light (incandescent) for the main, and a much smaller fluorescent trouble light for the fill light.

I honestly can not see the hue. I keep guessing at violets and greens, but nothing rings true. They say any hue will work if the value is correct. And it’s true that if I flatten it to black and white the values look accurate…but that doesn’t help as I agonize over paint colors at my palette. 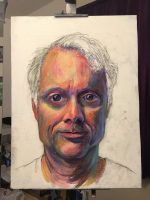 Self Portrait, 7 hours in

It’s lovely to have the spare time to paint. This quarter has been too much work and not enough play, up until this week.

Lisa and I did our usual birthday ski Tuesday. We went to Crystal this year where I tried out some borrowed downhill skis. My normal tele boots didn’t fit them so I tried out some boots from the early eighties and they were horrible. Now I realize I need to invest in new boots that will work for modern downhill skis. But I can’t afford both downhill boots and backcountry boots…assuming I want to ski randonee style (AT) in the backcountry.

At Crystal I quickly shed the downhill gear and went back to my telemark set up. That was awesome in the deep powder and I made it all day in those. But it’s all about the boots. My tele boots are only a few years old and they work great, very supportive in deep snow. My son said he would help me look for modern downhill boots when they go on sale this spring.