Laps on the tennis court

Ping pong started up again at the community center. Sue and I have been having a lot of fun there. We know many of them going back 3 years now. Most of them are our age, not because it’s for seniors, but because it’s in the mornings on a weekday. It’s doubles ping pong so not only do you play the game, but you also have to avoid your partner as you dance in and out of play.

I’ve also been to the climbing gym about once a week with Chris and or Alex. It’s good to keep up some gym power for pulling on plastic. The skills do transfer over to outdoor climbing a bit. But my main sport, and the most exciting one is still the unicycle. I practice about 2 hours a day.

It must seem odd to an outsider why a bicycle with only one wheel would catch my fancy. They took a perfectly good, stable transportation device and cut it in half. What were they thinking? And why would anyone want to learn to ride something so difficult? These are questions that I ponder.

Maybe it’s just for the challenge? Initially I thought it would be a cool and compact way to bring a bike in the car. It’s so small it doesn’t have to ride on top. And the guy I saw riding around the campground at Joshua Tree looked really cool. He made it look so fun and easy.

The price of entry was very low. We found one second hand locally for $60. But it almost put me in the hospital. I did a backwards fall onto concrete landing on my elbow and tailbone. This was before I learned to armor up. My elbow hurt for a month, and Sue gave the sport up on the spot.

But bone headed me…that just upped the ante. I kept at it. For some bizarre reason I thought the sport was worth the risk. Anyway I’m almost 6 weeks in and it’s finally getting easier. My old 1980 broken ankle is not happy with the sport. It’s not liking all the jumping off that occurs when I crash. So far it’s just stiff, and loosens up with time. Hopefully I’m not damaging it.

« Does not require a push | City of Rocks Rendezvous Number 2 »

Does not require a push 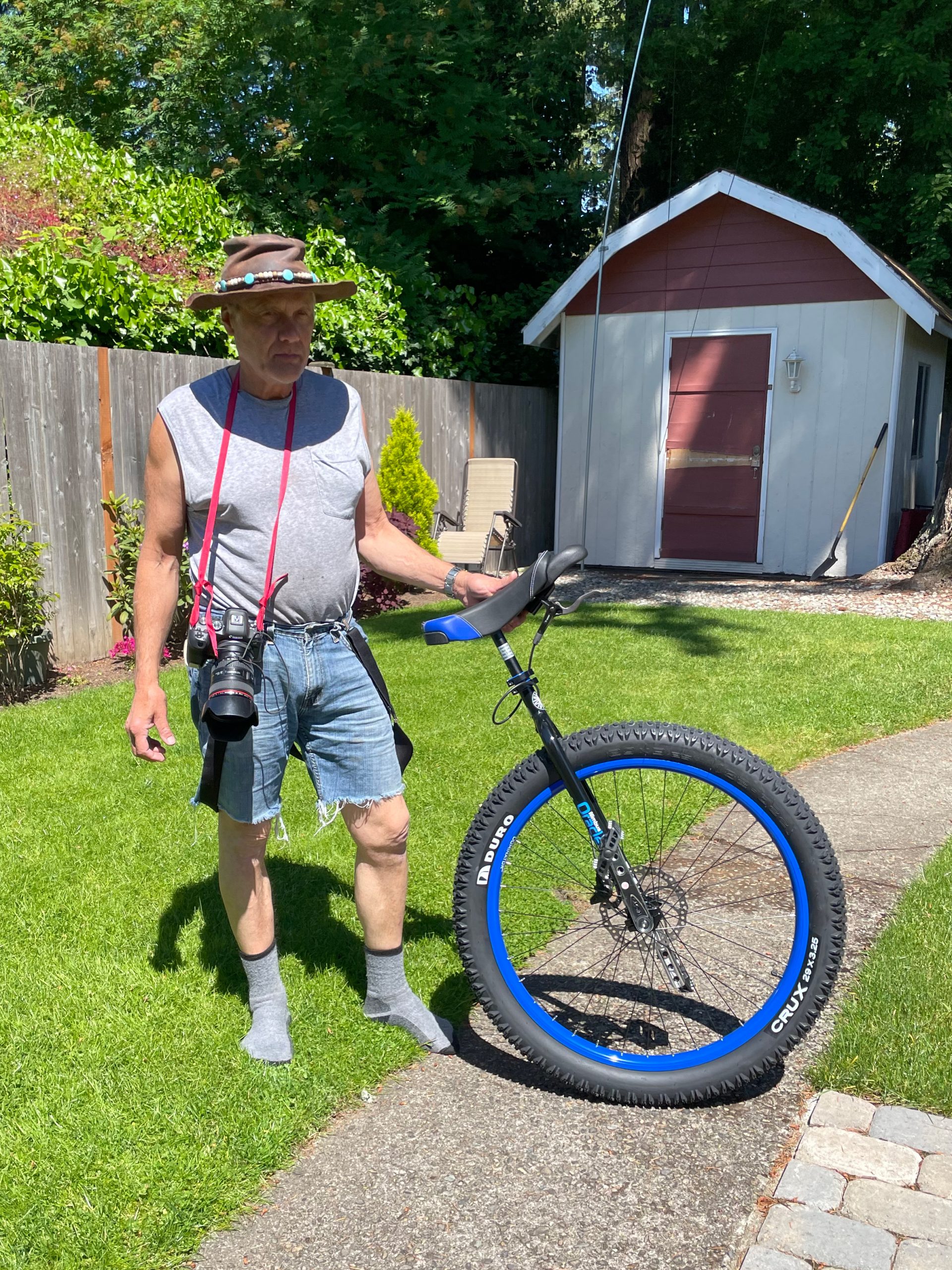 I’m on my 6th day of riding my new 29 inch unicycle. I had my 19 inch dialed in to where I could reliably ride 120 feet. But this new bigger wheel is very different. I’m only 10 inches higher in the air, but it feels so much more dangerous. Surprisingly, the falls feel about the same. I’m not hitting any harder. In uni jargon falls are called UPD’s. (Un Planned Dismounts). As one gets more graceful, the UPD becomes a simple stop where you gently step off, like stepping down off the last stair on the porch.

There is a certain ponderous momentum that has to follow through before I get spit off onto the tarmac. So even though I’m falling from higher up, I don’t seem be hitting harder. It’s still just a light jump down onto the pavement / tennis court. I’ve learned to tighten the top lacing hole on my high top loggers to give me more ankle support.

But today the space aliens had stolen my brain. I spent at least an hour falling off repeatedly and immediately. Thoughts of selling the damn thing passed through my mind. Like, what happened to all my skill and knowledge? How could I be so terrible when just two days before I’d been pedaling 60 feet? Over and over I’d pull myself upright on the tennis court fence, only to fall off after pedaling a yard. To the neighbors around the park I must have looked like a madman: getting on, falling off, over and over.

I could picture them looking out into the drizzle at this crazy person beating themselves up at a sport in which they clearly have zero talent…so pathetic. I found myself falling into that loop of self doubt…the one where you know you’re going to be bad, so of course, you’re bad, as expected, and repeat.

But after an hour of being a total sap, and as the June rain started to soak the court, I made a little discovery. Well, several actually.

That was yesterday: Saturday. Today I did it again. I started at Jefferson park and got 30 feet on my second launch. I made it across a few times before tennis players showed up and I diverted to Whittier park. I did full transits at least 5 times in a row. It started to feel much more natural. I had more weight on the seat.

With more seated weight, it takes less effort to pedal and you can get into a rhythm that feels very stable. Falling off is less of a concern and you can start to think about the process of steering, which is also new. In general it was less thinking, more solid launches with error free stability. Almost like I knew what I was doing.

In other news, today I completed 4 repair projects on my sewing machines, i have the industrial Juki, and an old 1950’s home machine: (1.) added new leather lacing strips to my worn out red rock shoes; (2.) re-sewed the detaching neoprene wear panels on my black and green rock pack; (3.) repaired a rip in my ultra light 3 oz climbing wind shirt; (4.) Fixed my skate boarding wrist guard gloves. I opened the glove side seam and replaced the ripped one mm leather with full grain 3 mm leather.

And two days later (today) I ended up at Ruston point on the bike path overpass. My first launch was a 60 footer…that has never happened. Ruston is a fun place to ride because there are no tennis players to compete with. On a weekday it’s pretty quiet, just the occasional joggers and walkers. Often there is a long line of cars waiting to board the ferry. I wonder what they think about the wacky guy on the unicycle.

I was doing quite well, riding halfway along the bridge…about 100 feet. I still find this sport exhausting. It reminds me of skiing early in the season when I get that thigh burning sensation. It’s also extremely aerobic. I literally have to stop and lean on the railing to catch my breath.

As I was waiting for my heart to slow down, two gray haired bicyclists pedaled up and stopped. They were fascinated by my unicycle. Never mind that they were riding $4000 top of the line carbon fiber road bikes. They wanted to know all about my uni. One of them had ridden a uni in grade school but not far and not since. They knew how hard it was and we talked about the challenges of one wheel. I joked that I “should have spent more and got one with two wheels!”

They kept egging me on to ride it, they wanted to watch…like I was a tight rope walker or something. Talk about pressure! But I manned up and wobbled off, riding my usual 100 feet. As I was rolling away I heard him holler: “Good on ya, mate!”

I kept at it and finally managed to ride the entire span, or at least the first span to the turn. Which looks to be 60 meters…200 feet. My longest ride yet. Still a lot of arm flinging and wobble…but by golly I’m riding.

« Unicycle | Laps on the tennis court »