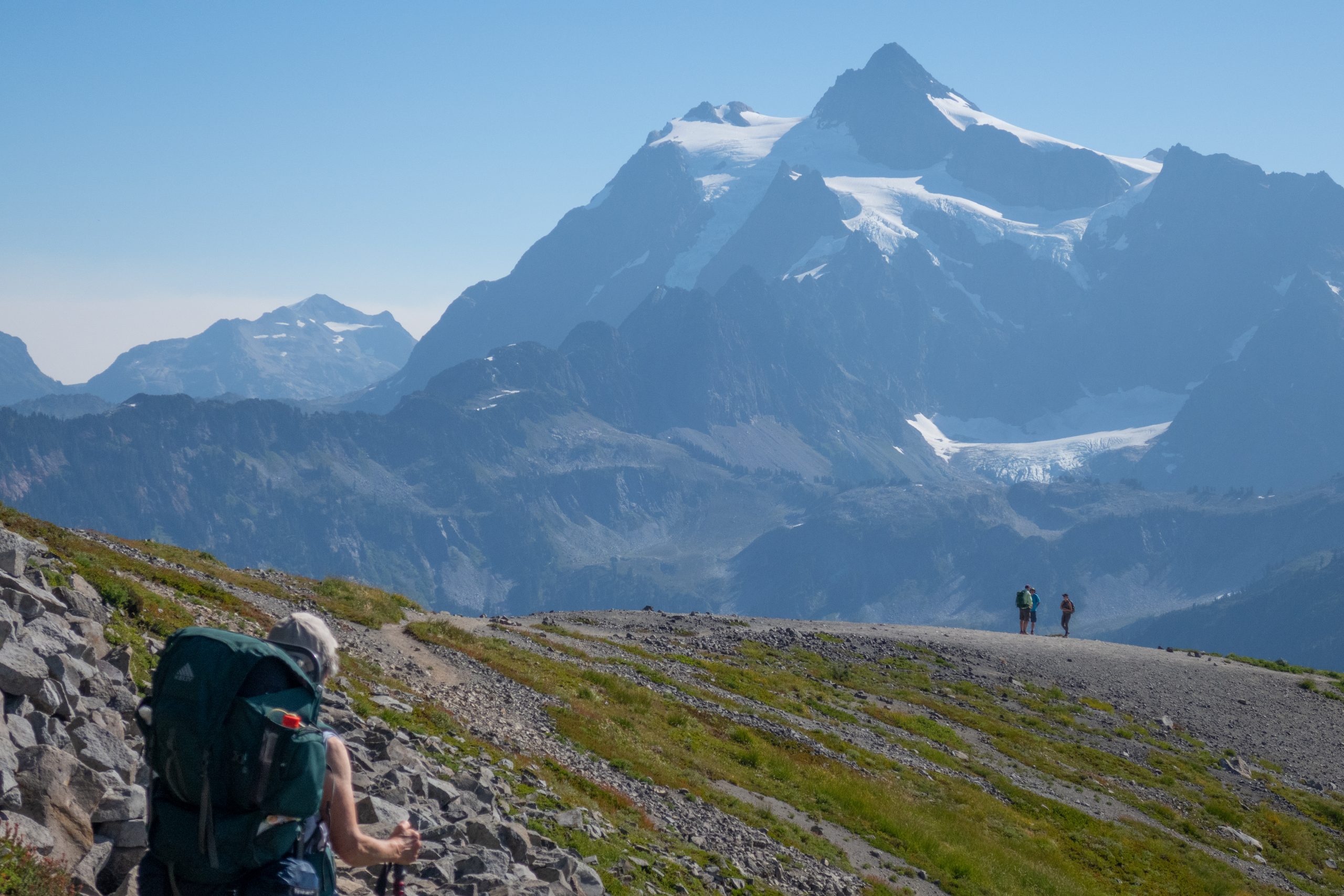 For our 43rd wedding anniversary Sue and I spent 5 days up at Mt Baker. We left Tuesday around 10 AM and drove up to Artist Point, arriving at 2 PM. We loaded our backpacks and hiked the 4 miles out to Ptarmigan Ridge. There had been a lightning strike the previous day and a huge mushroom cloud was looming on the ridge beyond Shuksan. Though we were walking away from it some smoke was wafting our way. Over the last 6 years fall seems to have become fire season. At least it looked like Artist Point and our hike would’t burn…so we soldiered on. After our epic last summer I now carry an inReach Explorer. In a worst case scenario we can always reach out to communicate.

The trail has a series of long side slope ridge traverses that are like false summits. We’d pop out of a patch of trees and see another long open slope with the trail cutting across it, sometimes for a mile or more. It was not steep, but that trail went on and on. The footing was often rocky and sometimes exposed. It was not a place for daydreaming.

We first learned about false summits while climbing Mt. Adams in the seventies. Hiking is about patience and suffering. Probably less of the suffering when you are young. But at our age, there is definitely some suffering as the old worn out joints plod along the dusty miles carrying 40 pound packs.

We’ve put a lot of thought into carrying lite loads. But combining plein air with backpacking makes for undeniably heavy loads. We could probly shave some weight here and there. Sue won’t share a quilt, insists on her own bag. I bivy in our tarp tent in down pants and a down vest, supplemented with a foil space blanket. It works, but it’s not ideal. I should have brought my expedition down coat, but it’s heavier. It’s scary to be 4 miles from the car and almost shivering in the middle of the night. We used to call it a *suffer bivy* back in my mountaineering days. A shoe for a pillow and all that. I could add a ultra light weight bag, and skip the down pants and puffy vest, since it was hot during the day. But my thinking is that the down pants will allow me to plein air paint in colder weather.

I also refuse to give up my easel. It’s an ultra light carbon fiber camera tripod that allows me to stand up and paint…but it does weigh 4 pounds including the shelf. I could sit on a rock and paint on my lap, but I hate that experience of holding the painting up while I paint. It’s so awkward. I like being able to walk away from the painting and see it from a distance. Van Gogh made it work and so can I.

The stars were so bright that it never got truly dark. I was able to look out from the bottom of the windy tarp tent through the mosquito netting and survey the ridge we were camped on…as I shivered. Hmm, no cougars or bears trying to eat us yet. Yeah, it has been a while since we backpacked…maybe a year or two? It was a little warmer the second night. Sue slept on the windy side since she had a real sleeping bag. It might be cool to get a BD Firstlight, or one of the new Dyneema tents since they are under 2 pounds and totally sealed from wind. But it seems silly to spend those kind of dollars when we backpack so little.

Smoke wasn’t bad Wednesday morning. We woke up to a fantastic sunrise with amazing light on both Shuksan and Baker. Alpenglow at 6200 feet is very special light. You have to earn it in our state because there are no highways that high. We found we had forgot our coffee. I had some shot blocks but it’s not the same experience as sitting with a warm cup and watching the sun rise.

The alpenglow faded quickly and the mountain settled down to a pretty morning light. I set up my easel and painted while Sue wandered around texting photos to the kids. It was odd to have service that high in the mountains. We assumed it was from the Mt Baker ski area. There was a massive cell tower installation just 4 miles away where we’d left the truck.

The painting was ok, but I was frustrated by a couple things. Grey clouds were on one side, but when I started painting them they promptly morphed into something else and I was left painting from memory. The lit up top edges of the crevasses were brighter than the glacier surface…which was a sort of light peach. Once I’d painted the peach, I had no easy way to add in the white crevasse hi light. I didn’t think of using a white pen.

Later in the day I tried to paint the afternoon light but it was all washed out from haze and being on the North side. It’s the reason I can’t paint Rainier at Sunrise: North light on glaciated volcanoes is very low contrast. That painting bombed. We slept a second night there to rest our old bones and hiked 4 dusty miles back to Artist Point in the morning.

Sue took a nap in the truck while I hiked up to be the designated Artist at Artist Point. Last time I was there a tourist asked me if I was on the payroll of the Mt Baker National Forest. I had a couple people make drive by jokes: “Hey, whatcha painting?” & “You know it’s cheating to use Paint by Numbers!”…to which I replied: “I know, but it’s the only thing I could find at the drug store.” That painting was ok also, though I wished I’d been brave enough to paint the trees under the mountain. I may still do that as I took photos with my little pocket Canon.

When I walked back at 7, Sue still hadn’t moved from the truck.That girl knows how to relax. How come I can’t be like normal people? Do a nice hike, take a few photos and call it good. What drives me to work so hard at being an artist? It’s not like we need the money. Well, I guess extra money is always nice. But unless we want to travel to Europe or something, we’ve got enough to get by.

In the evening, Thursday, we drove downhill away from all the No Camping signs and turned off on the first dirt road. It was completely deserted, zero traffic or people and found a nice wide pull out to park the Tundra for the night. Sue ran into and shared beta with some people the next day who asked if we had found any crash spots. When we went back the next night, Friday, they were in “our” spot. Funny how that works. But we drove down the main road further to Silver Firs campground which has an overflow lot and joined the tribe there.

It’s always nice when you are looking for boondocking spots to see other trucks, vans and trailers. We are all just trying to enjoy the great outdoors. And campgrounds are always, always booked up with the new online reservation systems. We spur of the moment campers have no option but to boondock. One oddity was a single guy with a little Ford Ranger pickup. He had a huge Walmart tent, an equally huge gazebo, 5 bundles of wood and a full size picnic table for cooking. He lit a monstrous bonfire under the gazebo, despite the 80 degree temperatures. We were glad he was parked on gravel so he couldn’t start a forest fire. Sue speculated he was recently divorced and used to camping with a family.

Backing up to Thursday morning…we got up late and set up our 12 volt DC and propane powered outdoor shower. I’ve finally got all the bugs worked out of my DIY hot shower and it’s pretty cool.

Around noon we drove up to the ski area again and parked in the lot for the Heather Meadows hike. I headed downhill for the afternoon shift at the salt mine while Sue went hiking on Baggly Lake Loop trail. It was blazing hot on the wooden deck at the lake but I had my mister (hillbilly air conditioner) and a sun hat/hood. The bugs weren’t bad and my painting turned out ok again. Not brilliant…but interesting.

I’ve been studying drawing online and this guy says you have to draw a lot of bad paintings before the good ones come along. I’m doing great at making bad paintings…it’s kind of a gift.

I’m thinking of doing Shuksan again…but this time planning it better. I had planned to have the water reflections in the lower half. But I screwed up the pen and ink drawing. Once you make a mistake with pen, the goose is cooked, there is no erasing. I may do it in oils at home where I have time to draw it right using my plein air painting as a reference. This is what the pros do. Plein air is not meant to be finished and sellable. Oils would give me a ton more control. There are no compromises with oils.

I was recently at my gallery by Mt. Rainier and he has one of my oil paintings. It’s one that was started plein air and finished in the studio. It’s a really lovely oil painting. I was staring at it and thinking “Damn, I used to be really good at oils!” Pen and wash is full of compromises and mistakes…but its lightweight makes it attractive for hiking.