Painting again with ink and wash

Painting again with ink and wash 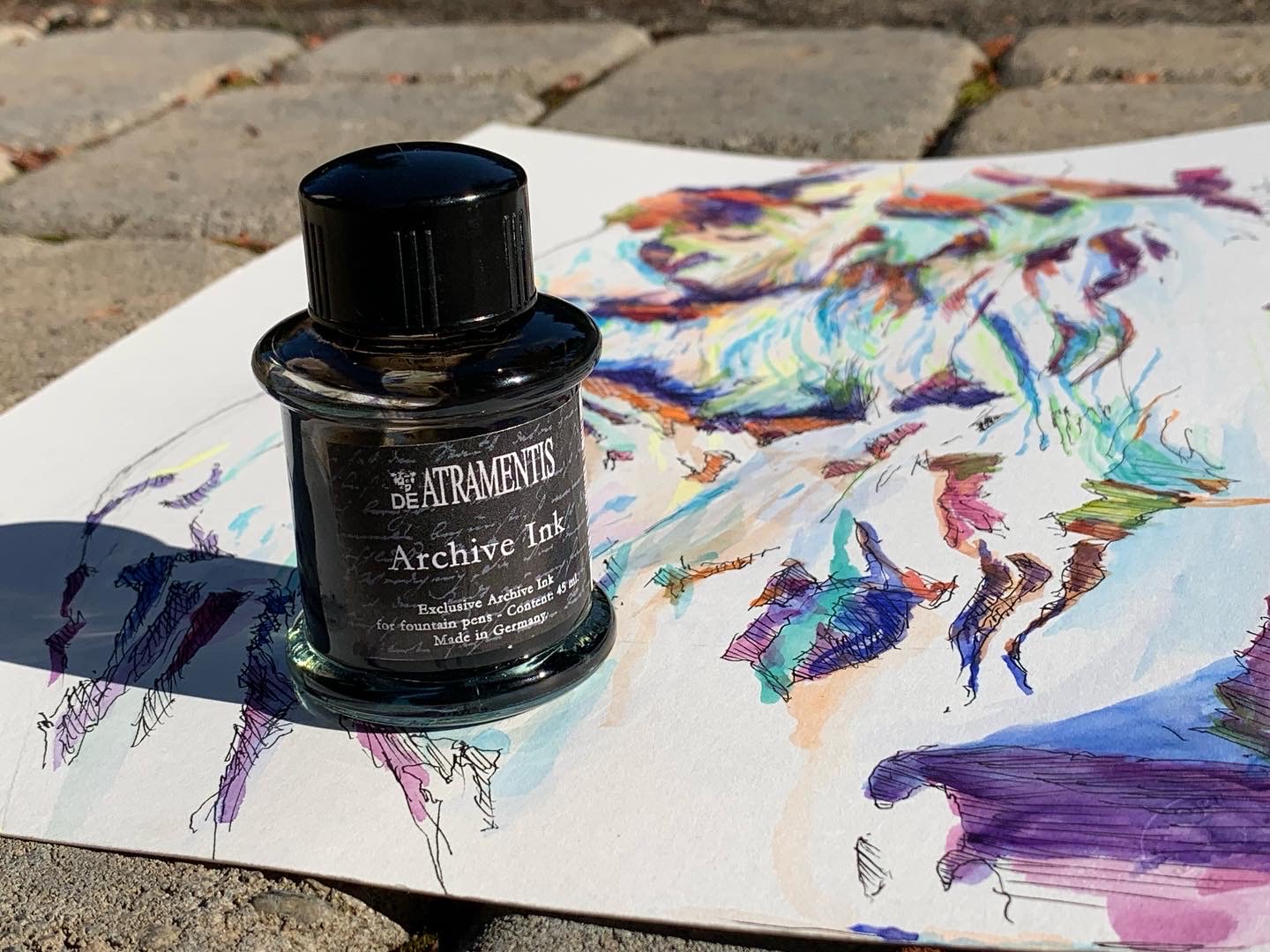 A couple weeks ago Sue and I hiked up the skyline trail to my favorite view of Rainier. I did a strong pen and ink underdrawing feeling dialed in. I put my pens away and started in on the Gouache. Normally, the India Ink is dry and I can paint over the top of the ink as if it wasn’t there. This time a disaster ensued.

I need to back up a little. Back in March, my Twisbi pen had clogged up. I was too ignorant to realize I was using the wrong ink. I’d gotten away with using India Ink because it does work for a while…just not in hot weather.

India Ink, also known as *dip pen* ink is designed to be used on pens from the 1860’s. Those pens were a wood body with a thin split metal tip (nib). You dip the nib in the ink bottle and draw until the nib runs dry, then you dip again. Think calligraphy from 1975. I’m not big on reading directions, and having come from dip pens back in the seventies, I put that same ink in my modern $60 Twisbi fountain pen. As long as I drew every few days, the ink, which has shellac and large pigment particles would work fine. But if I stopped drawing for a couple weeks, or tried to draw in a heat wave the ink would dry up and ruin a $25 Twisbi nib.

Fast forward to last March when my nib died. I purchased a new Lamy pen in Vegas, thinking it was using the same waterproof India ink as my Twisbi. I would have bought another fountain pen, but the Lamy was all they had at Blicks.

The Lamy ink, which comes in disposable cartridges, is designed for just the Lamy fountain pen. It will not dry out in the pen. Part of the reason it stays wet when the pen is capped is that it doesn’t have shellac.

My Twisbi pen would literally dry out while I was drawing if it was hot and the sun was shining. But back to that day on Rainier a month ago…I start to paint over the Lamy pen and ink drawing and the black ink melted and ran. Every color I painted had black added to it as the line dissolved. My yellow gouache brush strokes turned brown, my reds turned muddy. It was a wasted hike and a bad painting.

Wednesday Sue and I hiked up to the same viewpoint. This time I had my Twisbi fountain pen loaded with a new ink. I’d done my research after the Lamy disaster. I’d found a new waterproof and permanent ink called de Atramentis Archive. I also had my Lamy loaded with this new ink, plus a technical pen from my Uncle Dan (thanks Marcus) along with a new pen called a Noodlers Safety pen loaded with true India Ink. Beyond that I had a few Pigma disposable pens. I was loaded for bear.

I did a fine pen underdrawing and started in on the color. Big surprise: it worked flawlessly. No bleeding, no melting, a perfect ink. With that problem out of the way I could focus on what I do best: staring at the subtle colors on the mountain and interpreting them into something I could mix on my palette. As a famous painter once said: “The hue doesn’t matter if the value is right”. This means if you view a crazy colored painting in black and white it will look correct.

Painting the Nisqually glacier is always the heart of the matter. If I can nail those blues and greens down the rest of the painting is easy breezy. Those go down without a pen underdrawing. The values are so light pen can’t be used. I can usually capture it with about 7 barely there colors. Almost all the same value…just variations on emerald as the waining afternoon light builds into alpenglow.

I usually have about 90 minutes of stable light. It’s a mad dash of mixing and throwing color around. I love that part of the process. I’m like a kid in a candy store. Every little stroke of color makes me smile. I’ve had small crowds of hikers stand behind me while I’m laying down those brushstrokes, murmuring amongst themselves like I’m some kind of magician.

On the last trip, I was listening to some calming music on my headphones when a hiker suddenly appeared at my elbow. He startled me as it had been a fairly quiet day. But suddenly he was there, lips moving. I had to pull my ear buds out to hear him. I don’t mind talking to folks, but it does stop my painting process until they leave.

I thought of dropping by my gallery on the way through Ashford. But if he had wanted them, I wouldn’t even have high resolution photo for my records. Plus I like to fondle my latest creations for a few weeks. If it’s a boring day and I’m feeling uninspired, I can get them out and bask in their illumination.

« Do you have any Grey Poupon? | Return to Squamish »