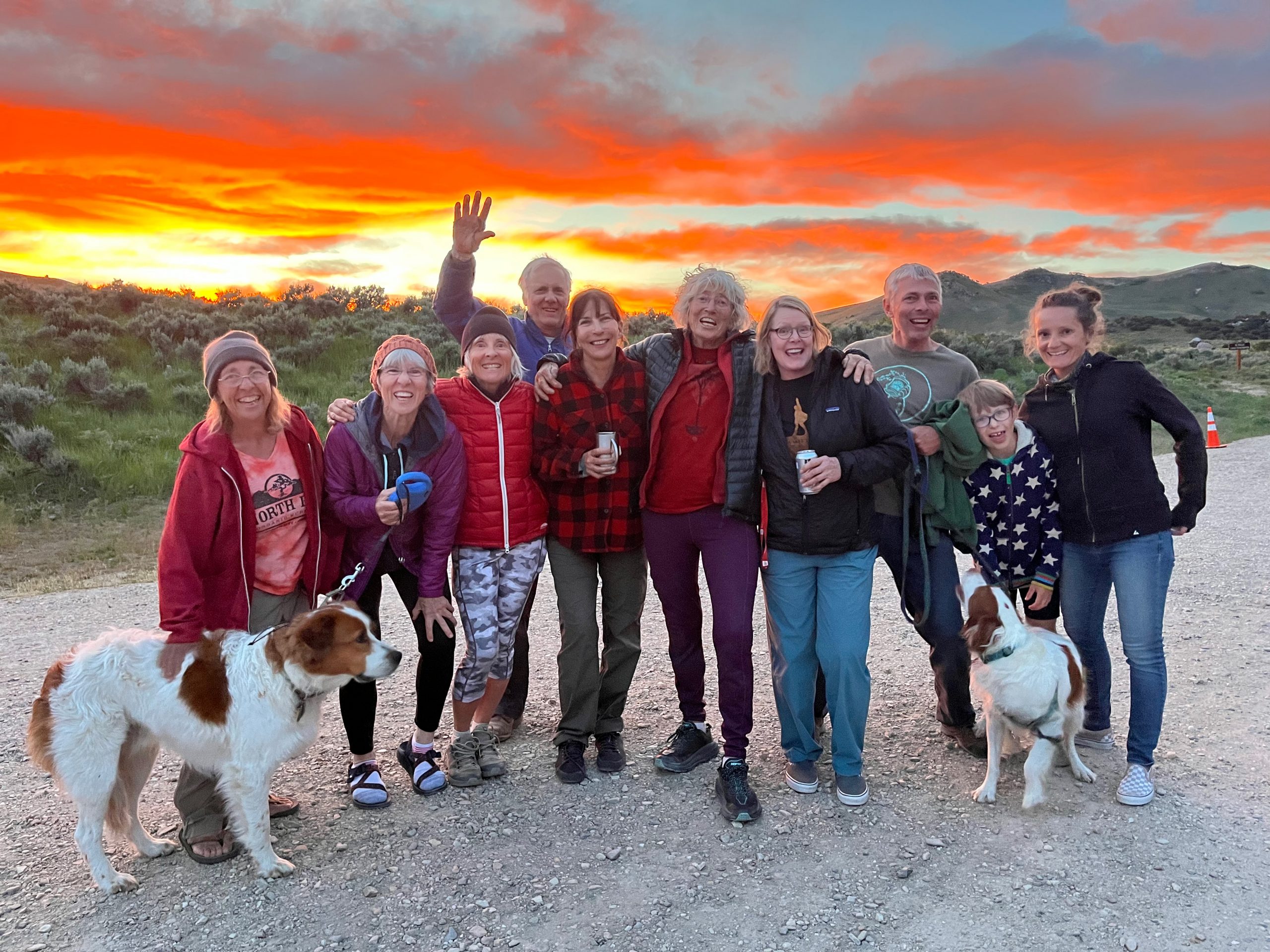 Sue joined me for my second ‘over 50’ rendezvous in Idaho. It was organized by Helen again, and about 8 of the same people came, plus as many as 10 new people. Simultaneously the super topo group was there at the Sisters. Jim has been going to that group for at least 5 years that I know of, maybe longer.

Because of the two groups there were a lot of gray and white haired climbers around. When we got there some of my friends from last year were camped down below, waiting for the group site to open up. Only Helen was up top, she was camped in 58, a walk in down by Carols Crack.

We had done the drive in two 6 hour days. For our midpoint we camped just past the crowded Emmigrant Springs at a campground called Hilgard Junction State Park. It was empty, $25 cheaper than Immigrant, and just a short 20 minute drive further South East.

On the second day Sue was on a quest to find an old school campfire percolating coffee pot. REI in Boise didn’t have it, nor did Cabellas. While in Boise I rode my Unicycle in a deserted parking lot. I also rode it every couple days in the gravel lot at the group camp. Gravel is really hard compared to pavement. It requires an aggressive forward lean that is very energy intensive.

Sue and I did Windance and Da Boyz on the first day after helping Helen set up her gazebo. Folks started rolling in over the next couple days. Cindy, Jill and I did Easy Corner on the back side of Breadloaves. On the rap down I saw a nice line of new bolts through a roof. It looked like a one move wonder at the roof.

It was just one move alright but it was a whopper. You clipped a few bolts and cams until you were standing under a 4 to 5 foot roof. Perfectly horizontal with a bolt out at the lip. The clip meant leaning way out behind your head, coming perilously close to falling over backwards. Once clipped I walked down the slab and reached up to the lip. Great jug at the lip, and with just a little stretch I could reach a super good left hand jug.

My chin was even with the lip jug. The move was to do a pull up on the left jug and put your foot by your chin. I was pulling so hard on that ultra sharp waco that I still have a painful scab two weeks later. Nothing like getting to bad bleeders on the first day. And no running water to keep the wounds clean. Plus they are right on the flexing joints of my first and third fingers.

After 8 falls and and two bleeding flappers I put a sling on the bolt and aided the move. Cindy followed it cleanly. The rest of the climb was barely 5.7. Cass showed up for a couple days. I climbed with her and a bunch of other friends old and new for the next 10 days. We checked out a new crag on the weekend called Geowatt. It’s out toward Stripe Rock on the right on the Geology trail. There was only one other party there so our crowd plan worked. I led a two sevens an eight and a nice sport nine with a couple falls. It was fun, but not worth the hike.

Midway through the trip we were all invited to have Pizza at Kim’s house. He has a lovely log vacation home overlooking the City of Rocks. I don’t know him personally but I’ve heard he is a long time climber who simply likes giving back to the community. He was very gracious and welcoming to all of us unwashed climbers showing up to eat many, many boxes of pizza. My friend Jim knows him from way back due to his association with the super topo group.

Sue, Jim, Keith, Jay and I hiked out to Lost World and climbed a bunch of the chill sevens and eights. They were also at Geowatt, along with Mark and family.

After Dara left, I followed Cory up Skyline, Scream Cheese and Swiss Cheese. I led Private Idaho 5.9 but the sun was baking Cory by the time he had to clean. We zombied out in the shade at camp for a few hours before Mark and I led one of the two new bolted Pogue routes on Bath Rock.

That’s our trip in a nutshell. Since returning I’ve been to Index with Christine and have returned to regularly scheduled programming on the unicycle. Riding tennis courts is problematic due to the annoying appearance of tennis players. Who knew that was a thing?

I just recently discovered a skate park in a huge abandoned parking lot by a stadium. It’s all asphalt, much larger than any tennis court and weirdos with helmets and kneepads are expected. I’ve found my unicycle Shangri-La!

« Laps on the tennis court | Do you have any Grey Poupon? »