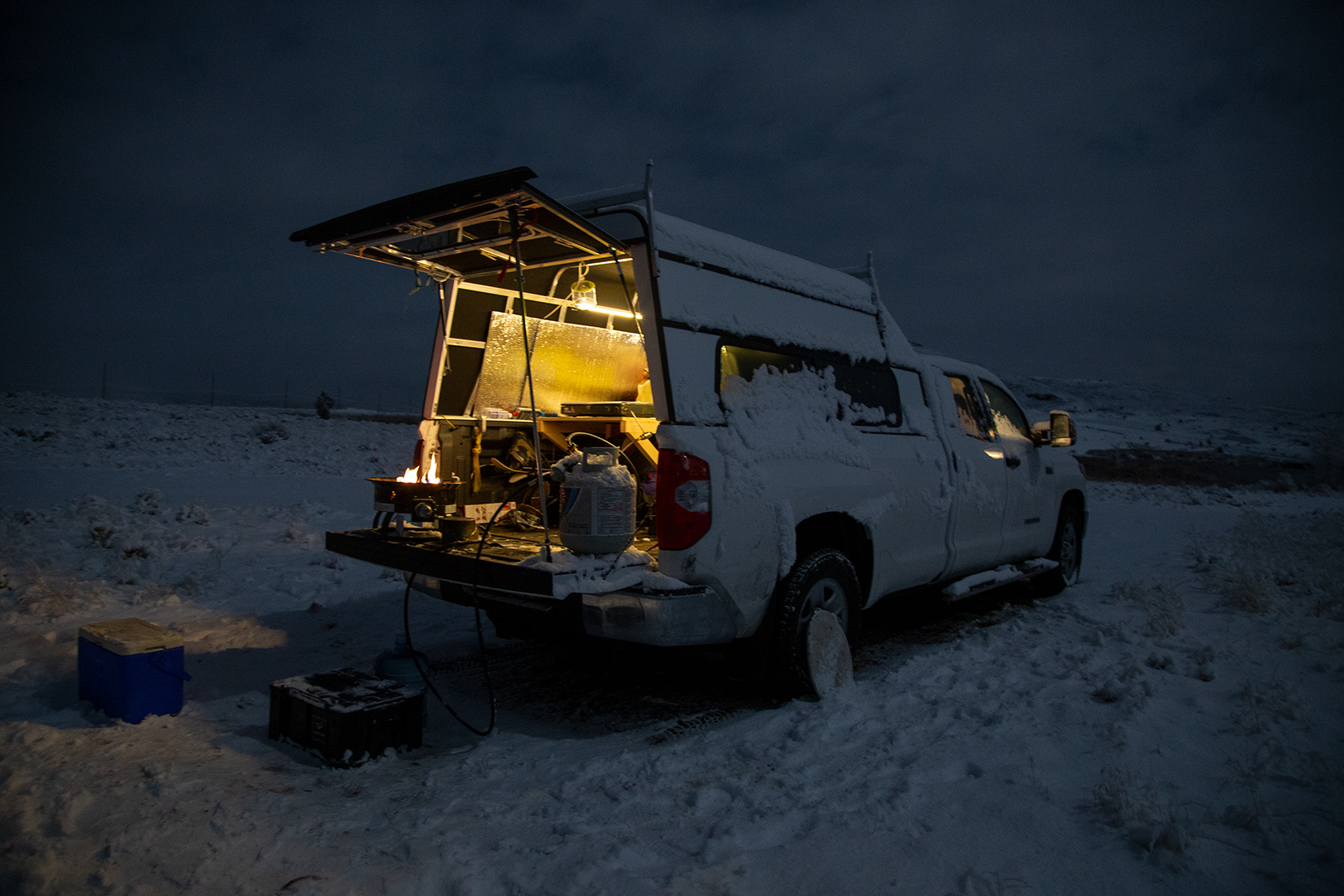 It’s been 20 days since arriving home from my 22 day holiday trip with James. We left on the 18th after the fall quarter ended. and drove to Zion in two days, sleeping once in the snow up on the Blue Mountains. It was a weird campground. Who keeps a campground open with 6 inches of snow on the ground? The rain and melting snow were pelting down at a furious rate all night. I wondered if we might be snowed in for the winter, but there were a few other campers around and I knew we’d get out eventually. The freeway was only a block away.

Next day we made it to a free camp spot outside Zion near Springdale / Virgin. Sue and I have camped there before. James left his tent up for 4 nights with no problem. The most we saw there was 5 cars. The next day we got to the Angels Landing parking spot around 8am and as soon as I drove into the crowded gravel lot I was immediately surrounded by other cars jamming in.  It was merciless. I backed up into a fishy spot that potentially could have blocked other cars from leaving, unless they drove backwards and around the lot. But I had no choice. My truck was too big to back out, that was like swimming up river. I was soon blocked in myself by cars doing much worse parking jobs right beside me. James was like: “Well, you’re not in Kansas anymore.”

We cooked breakfast in the dirt then packed up and started the hike. To save weight I took my oils out and put my gouache kit in my rock pack. Angels Landing is an extremely dangerous hike. It’s far worse than the cables route on Half Dome. The chain railings are secure enough, assuming some out of shape tourist doesn’t fall off and cause a chain reaction. But what if you pull a muscle in your hand, or slip, and and can’t hang on? The worst spots were some sandy slabs where there were no chains. Who decides these things? On a climbing approach we’d belay the hell out of slabs like those. There were huge drop offs below them.

The trail looked endlessly dangerous…but was actually quite do-able….as long as I kept my cool. People hike it all day long. I did regret my huge pack. No one had as large a pack as my art pack. But, I did do a reasonably good painting considering we’d just driven a thousand miles in the last 35 hours.

I need to sew a lighter pack, one that isn’t so overly re-enforced everywhere. It just needs to be good enough for skiing and gouache painting days. Probably should have a zipper in the back for repair access…with a vinyl bottom.

Next day I painted Upper Emerald Pool, badly. I just couldn’t seem to get my game face on. Day after that, our third day at Zion, we tried to climb the Mountaineers Route. It used to be like Angels Landing with cables everywhere, built around 1920. It was chopped in the eighties when maintenance became too expensive. There is lots of evidence of the old tourist route in the shape of chopped one inch iron bolts and polished footsteps carved into the sandstone.

James was totally comfortable free soloing death slabs but I hated it. At one point, I was traversing a slab with a huge drop off. There was a bush 50 feet down that might have stopped a slide towards the drop off, or maybe not. We actually had a discussion about the odds of landing on the bush, versus missing it and plummeting into air. James was already across with the rope. The cliff  ahead got steeper and was forcing me backwards. The ledge narrowed down to 2 inches of horizontal “trail” on the steep sandy slab. It was about as steep as Slender Thread at Peshastin.

As I stepped forward there was a prickly bush that forced me even farther backwards off balance toward the drop off. I thought of calling James for  a belay, but he was out of sight around a corner scampering happily along. With no other options, I grabbed a half inch thick branch of the bush and edged forward thinking: This is a really stupid way to die. I made the move, the flat spot on the slab got bigger and I was able to “hike” another block or so before the same scenario repeated itself. This time I hollered for James. He came back and was able to get me a top rope by scampering up to a 2 inch bush behind which he could belay. All together there were 5 places I had him belay me in the thousand feet we climbed. People on Mtn Project were saying they either free soloed everything, or belayed maybe twice.

I have zero tolerance for mountain climbing. People who enjoy the danger are made from sterner stuff than me. I like the “relative” safety in rock climbing. Sure, it’s dangerous, but so is driving in the dark in a heavy rain storm at 70 miles an hour. Mountain climbing involves a lot of movement over 5th class terrain with no rope. It’s more like that same rainstorm, in the dark…but on a motorcycle. Your margin of safety is very narrow while mountain climbing. I’ve had 8 friends die mountain climbing. Any serious mountaineer will tell you the same stories.

But back to the cliff…we were only half way, a thousand feet up, and it was 2pm. I didn’t want to descend in the dark so we bailed. The rangers told us they were locking the gates next day, which was Xmas eve, the 24th. For three days we had been able to drive through the gate at 6 AM before the rangers arrived.

Beginning in the morning you would only be able to come in via shuttles, and only if you had a reservation. That was a non-starter for us and we bailed at dawn, driving to St. George in a few hours. We lucked out with a $20 camping spot at Snowy Canyon campground. Full service hot showers and everything.

Just Deserts is a lovely three pitch 5.8 with modern bolting…so fun! There is a three pitch 5.7 to it’s right. I led the first pitch, but bailed on the second after Dennis took a 20 foot whipper on a pin. It’s protected with half inch angles…but they held his whipper…I just didn’t want to chance it.

It was good we bailed because at the bottom James suggested doing another route, but I realized Dennis and Julie were probably having trouble finding the walk off. They should have been down an hour earlier.

I hustled around to the walk off an saw them at the very top, belaying down the wrong way. I hollered  to look for a hidden manhole style tunnel to skiers left, then began climbing up to guide them down. James and I had just done the walk off earlier on Just Desserts, so I knew it well.

We got all got down and had a nice wood fire that night. Dennis brought the wood.

The next day they did Just Deserts while James led a horror show of a 5.6. 50 feet to the first manky cam, and it got worse from there. He has a dangerous ability to basically free solo chossy rock. He just keeps going up as the pro gets worse and worse. And he does it in guide tennies.

We joined Dennis and Julie where the routes converge and sailed to the top, where it started to rain, hard. Dennis set up a 3 cam anchor for a handline, which I happily used. Then we slid on our butts down the 4th class slabs. That night, they guided us up to Prophesy Wall where there is BLM camping…and 3 inches of snow.

In the bright white morning we drove to Jtree with a stop to see Aaron + Katie and the ham store in Vegas. I ordered the FT3DR general delivery to Jtree post office where it arrived 4 days later.

Jtree was fine, I led Hands Off, Damper, Toe Jam and a super fun new route called Penny Lane left of Double Dip. I tried to lead Stick to What and Touch & Go, but there were crowds of top ropers so we bailed to a nice little 5.8 chimney route left of Chalk Up Another One.

That’s basically the trip. It was 22 days on the road in the Tundra. I never got very good. I don’t know if it’s because I’m getting older, or if it was all the interruptions. Driving here, driving there, bad camp spots many miles from the cliffs, endless hours of driving, unfamiliar climbing areas….I have lots of excuses.

One of the things I really like about jtree is those lazy mornings at the campground. This is pre-covid of course. You get there, you stock up on food and you live the life until the food and water runs out. All the climbs are familiar, like seeing my cousins at a family reunion. There is very little stress. It’s conducive to getting real good real fast. Can’t wait get back down there after covid eases up.