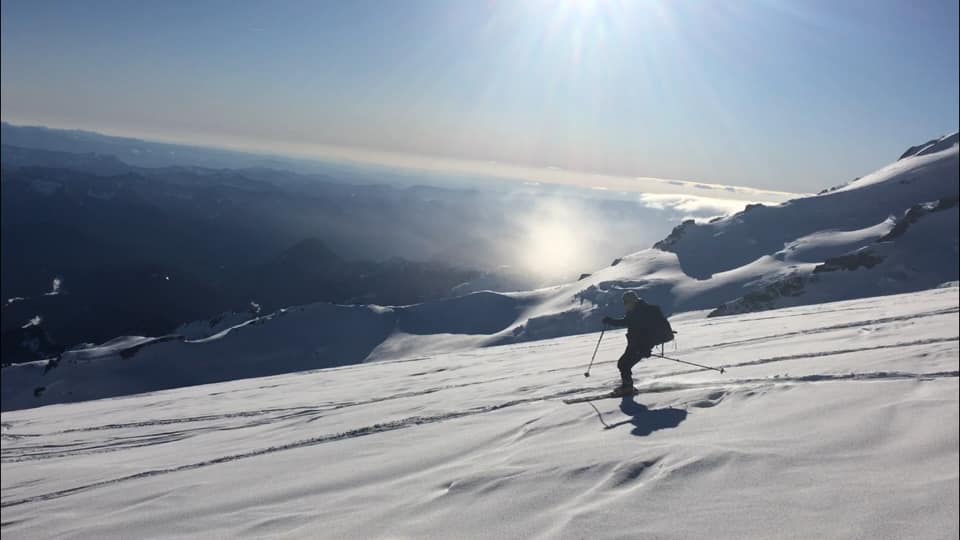 I forgot to write up our Camp Muir trip 3-3-19. Sue and I used to ski up there a couple times a year. But since we had the kids (who are 31 and 34) we’ve been doing short little 4 mile loops around the area near Panorama Point.

The kids have been after us to ski to Muir. For them it’s no big deal. My son loped up there and down in two hours and 38 minutes on Sunday. That doesn’t include a half hour rest at the top.

We made a number of false starts over the last two seasons, getting turned around by bad snow, white outs, wind or low energy. But on the third, Sue, Lisa, Clint, Jamie, Craig and I all headed up toward Muir on a perfect bluebird day. The gate didn’t open until 9 and we started skinning up at 9:45, arriving at Muir at 4PM. Along the way Jamie (Clint’s S.O.) and Sue turned around  above Pan. Craig, Lisa and I continued on above Pan but we soon noticed Clint had  vanished.

Lisa and I were climbing together when Craig caught up. He was surprised that Clint wasn’t with me. I told him that Clint was probably making sure that his mom and girlfriend were OK. These are generally not people you want to ignore, especially on a dangerous mountain. It turned out that Clint had given his mom his ice ax, and persuaded Jamie to take off her snowshoes and descend in boots, using her ax for self arrest.  It’s easier going down steep snow in climbing boots.

Clint caught up with us in an hour and the 4 of us continued up under perfect sunny weather. In case you don’t know us, that means me, my two kids and Craig, Clint’s best friend.

As we approached 8500 feet I started to slow down. The last 500 feet of elevation was really hard. Muir is 5 miles one way, and gains 5000 feet of elevation. I’ve been working out on the stair master but it wasn’t enough. I got to where I had to stop every 100 feet of skinning and rest. And the higher I got, the more I had to rest, with the rests becoming longer.

I began to do the math and wondered if I’d ever make Muir. My heart was doing the pounding thing…but it was just like when we skied up St. Helens last year…so I figured I’d survive if I took enough rests. Time after time I’d be draped over my ski poles trying to catch my breath…waiting until I had the strength to climb up again. I’d look up the hill and there would be the 3 young people, staring down at me, patiently waiting and wondering.

When I finally made it there were broad grins and high fives all the way around. We hung out for a few photos but there was no time to spare. We were the last ones up and needed to get off the mountain. It was 5 miles back to the car and a lot could go wrong: broken bindings, sprained knees, white outs. There is no ski patrol or snowmobile rescue on the mountain.

On the plus side, we are all very experienced at  back country skiing, with decades of time on Rainier. The ski down was fabulous. It was 3 inches of wonderful corn snow slash powder…for miles and miles.

A climbing acquaintance of mine was recently featured in a film. I’ve met her and her sister numerous times at Vantage. She really is that good.