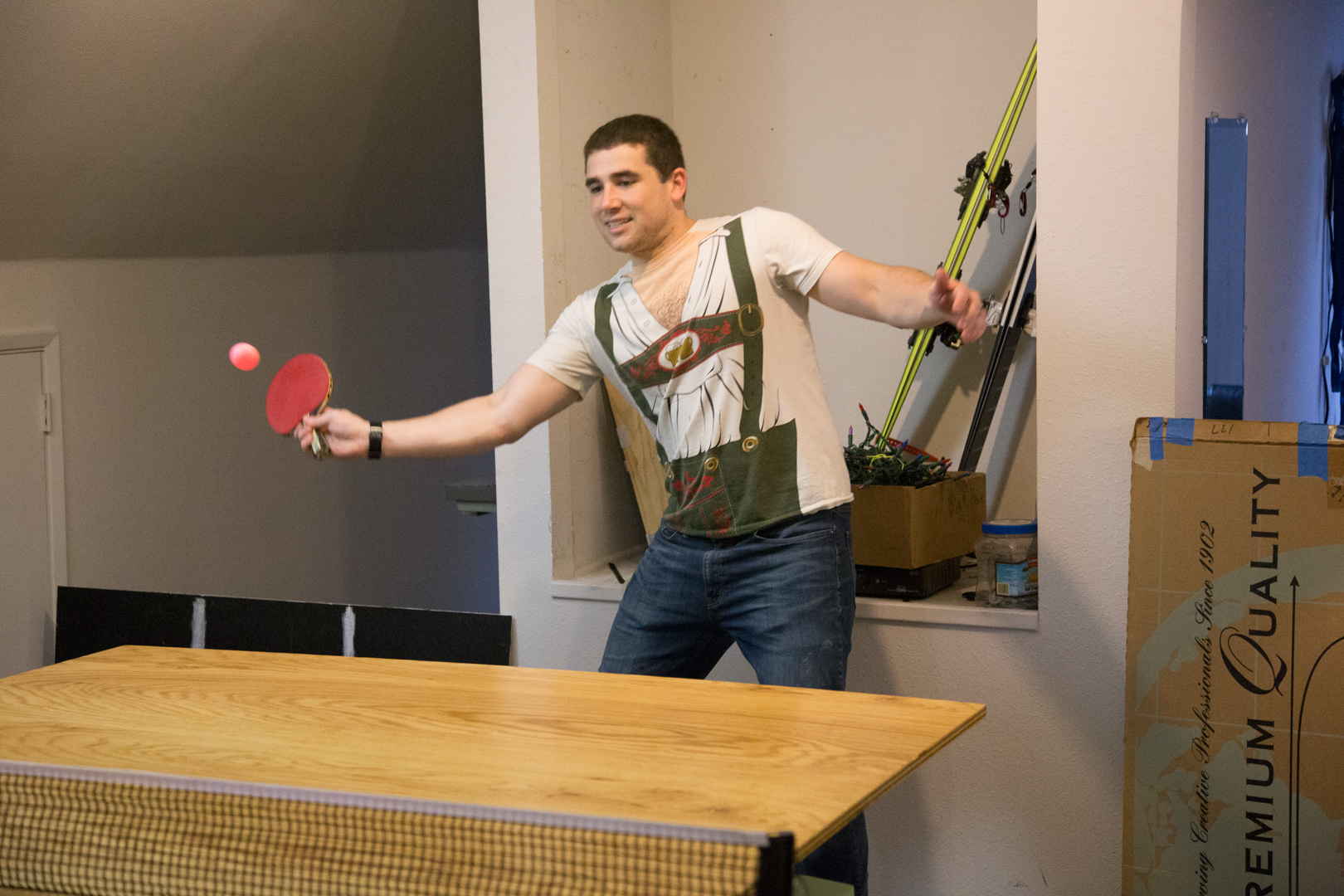 I grew up with a ping pong table in dad’s basement. Three years ago Marty and I played pong on a climbing trip at Squamish and fell in love with the game again. We were having as much fun playing pong in the evenings as we did climbing during the day. We would trash talk each other’s climbing abilities with promises of revenge at the table after dinner.

And then the battles for superiority, man that game is fun! When I returned from that climbing trip I built a table from some scrap plywood and have it in our spare bedroom. Sue and I play when we can. This is a picture of a  friend who came over to play. So when I heard that our new community center had ping pong twice a week I decided it would be nice break from studying and a good way to get some exercise.

When I walked in I was a little alarmed to see people my age, and older. One woman was 73, and one of the guys has a stiff back.  But I try to never judge a book by it’s cover and was soon batting the ball around. They specialize in doubles in this gym, which I have rarely played. That first day, I ran over my partner going for a ball and knocked her to the ground. Everyone looked shocked, as if I’d committed a horrible sin. I felt terrible and apologized of course, though in my sports: climbing, skiing, hiking,  windsurfing, volleyball, falls are normal.

She got up slowly and kept playing, saying she was well padded. But I could see my first day with these people had got off to a bad start. Despite being seniors, several of them are a lot better than me. They have wicked serves and slams that rarely miss. Some of them are really good!

In doubles, you only hit every other ball. So if your partner is serving, you stand back. As soon as  the ball goes over the net, the table is yours. You hit the returning ball and dash out of the way. Your partner hits the next one while you stand behind them…or at least out of their way. Then it all repeats.

Often, because you are behind your partner when they are hitting the ball, you have no idea what has happened. Your partner hits, then circles around behind you while you assess the situation: where is the ball, and where is it headed…assuming the other side has managed to hit it back. It requires intense concentration to be in the right place to return the ball, while simultaneously avoiding colliding  with your partner, who is hovering nearby, getting ready to return to play.

I’d liken doubles table tennis (it’s official name) to a dance. When it’s done well for several rallies there is a beauty that builds up…a sense that magic is happening and we all try to keep it going for as long as possible. I know it all sounds a bit stupid, batting a little white plastic ball around a table. But after a couple hours I’m sweating and wishing I’d worn shorts and a tank top, in February.