Phil and I had an awesome weekend at Vantage. Saturday we climbed the Seven V…. route. Phil wanted to warm up on something easy and Seven V… is a nice 5.7. After that we walked over to the Air Guitar area where we did a nice fist crack called Pony Keg. We had both Phils rack and my rack so I was able to bring up 4 blues and 4 yellows, plus a couple greens and reds for the bottom. With enough big gear, Pony Keg feels just like Classic Crack: a fun cruise up a lovely crack climb.

After that we both led Air Guitar, which felt harder, but still very do-able. I was expecting it to be a give-away, but had to fish around for the correct moves at the bottom. Pony Keg is very straight forward. You climb the crack and go, but Air Guitar starts out with a combination of thin finger jams on tiny cams combined with not so obvious face holds. I soon got myself sorted out and sent the rest of it fine.

We led a few sport routes that day as well, with Phil finishing out the day on Bushido 10C. That thing was very pumpy. I don’t think I will ever have the muscle power to lead something that long and pumpy. I also need to take some practice lead falls outdoors to get my head ready for falling on bolts. 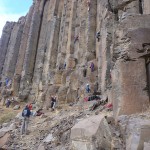 Sunday we walked up to the Sinsemilla area. We did a two pitch sport route there as a warm up and noticed a nice looking crack climb off to the left. I inspected it on the rap down and realized it might be within my abilities. We pulled our gear off the sport route and I led Corner Pockets cleanly. It was rated 10B trad and had a one very difficult move where you had to move up on a ring lock. It was a one inch crack, green camalot sized: too small for a hand jam, too big for fingers. The only thing I got was a ring lock where you wrap your thumb around your index finger. I had to pull down on that and a bad hand jam, friction my feet in the tiny crack in the corner of the dihedral and throw for manky jam higher up. The move felt very insecure. I was almost certain I was going to fall, which seems to be normal on 10b. I had good gear at my waist, and as soon as I moved up, I stuffed in a perfect yellow #2 camalot. It’s so cool to onsight new hard climbs. 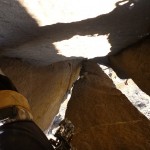 After that I led Throbbing Gristle. I shot this video while I was chimneying up Shady Corner, a very cool 5.7 like the 7V…. route, but much cleaner. You are in between three columns, over a lot of air. It’s a fun route, worth doing again with a better camera. My Lumix does not handle extremes of light and dark well.

On the rap down we inspected Split Beaver 5.9 and found it to be a lovely hand and finger crack. We both led it and loved it. It starts out with 60 feet of user friendly hand jams and good stems across to the Gristle column. Then it changes to very clean finger jams in excellent rock for another 35 feet to the top. Several of the moves in the finger section are committing, but there is always protection above you if you need it.

On the way out of the campground we saw a couple campsites where people were cooking dinner around their campfires, getting ready for another night under the stars, followed by more climbing under the sun. I’m thankfull to have a cool job that pays the bills, but it does always seem like the weekends are too short, especially when I am climbing as well as I did this last weekend.