I’ve been looking up at Easter Overhang on Midnight Rock in Leavenworth for 27 years now and wondering if I still had what it takes to climb it. Back before we had kids Sue and I used to hike up there regularly to climb it’s steep walls. 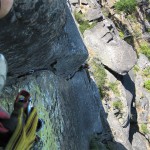 Easter Overhang looking down at Fletch

I stopped going there when my knees got tired of the hike, but whenever I was climbing on Castle Rock,  it’s little brother down on the highway, I would look up at Easter Overhang and think back on the desperate moves at the roof, and the exhilaration of pulling through that overhang successfully. Was I still good enough to climb that hard? The new guide books had raised the difficulty rating from 5.9 to 5.10c. I wondered if a key handhold had broken off, because I have never been able to enjoy climbing routes rated at 5.10c. But I used to love Easter Overhang when it was 5.9.

Fletch is always game for anything, and when I suggested Easter Overhang he loved the idea. He’d tried to climb at Midnight Rock with Melanie and got lost, though he may have put up a new route by accident when he started climbing on the lower walls of Midnight. 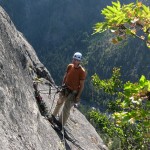 At almost two hours we finally emerged at the base of the cliff and began searching for the aptly named “dead end ledge” that accesses climbs in the upper cliffs of Midnight Rock. The trail leads across some very exposed sandy slabs with dangerous drop offs awaiting a careless step. We belayed this section on the way down as it was simply too dangerous.

Once we arrived on “dead end ledge”, I felt like I had arrived at a family reunion of people I’d not seen in a quarter century. All my old favorite climbs were waiting for me: Yellow Bird, Easter Overhang, The Flame, and many others. Nothing appeared to have changed, other than some moss  growing on some climbs that hadn’t been done in a while.

Easter Overhang itself is a lovely 5.8 hand crack up to the roof. There it starts to overhang as the crack widens to fists. I climbed strongly up to the fist section but missed the perfect right foothold and had to hang once 4 feet below the roof to rest. I blame tunnel vision and general incompetence. You can walk your camalots 2, 3 and 4 through this section. 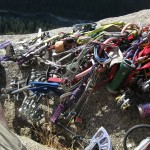 Our gear on the ledge below ROTC

After my avoidable rest/hang, I continued fist jamming up to the true overhang where it gets bigger than fist. There are very nice face foot holds on the right, plus a hidden flake back in the crack that make all this work.

At the true overhang I was getting tired and was very happy to see an old fixed pin. I normally don’t trust old fixed pins, but the exposure of the overhang was getting to my head and I was happy to clip that old relic. Once I stood up on the face holds on the right, I saw that the pin isn’t really needed, as there is also a bomber yellow #2 camalot there, along with a great handjam and a perfect ledge to grab.

But then it gets tricky. The crack is spitting you out, like a bomb bay chimney, it’s bigger than fist, there is nothing to grab, I think it was even bigger than a number 5 camalot.

I ended up combining a mantle on the ledge at the lip by the piton with a chicken wing to get through that. My feet cut loose and I was hanging there…secure, but dangling over all that freaking air.

Such a cool move! I chicken winged my way up, getting stuck several times until I remembered how to chimney climb again. I was glad to have two four, and five camalots, and two big bros. I used my green (8 inch) and purple big bros in the section above the roof…nothing else would fit unless you hauled up a valley giant up that two hour approach.

The trail is in horrible shape. Back in the day I led it with hexes and just 2 number 4 friends…wouldn’t want to do that now in my dotage.

Don’t know what to say about the rating. I normally can’t climb 10c at all, so I don’t think it’s 10c. It’s not as hard as Breakfast of Champions, which goes at 10a…so maybe it is still 5.9, though only if you are good at all flavors of crack, including fist and chimneys. It’s definitely harder for me than Damnation crack, but that really only has the one hard section off the deck. 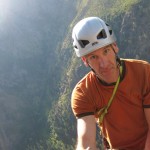 At any rate, it’s a stellar climb, 4 stars in my book. That transition move at the lip of the roof is just fabulous.

Instead of walking off, we traversed sideways to the rap station above ROTC, the famous 5.11c crack  climb, known as the best crack in Leavenworth. We rapped down the route and Fletch climbed it on Top Rope. It was getting late by then and we did one more rappel to arrive back on “dead end ledge”. We arrived back at the car at twilight and drove up to camp for a well deserved beer. What a great day!