I’ve been watching some lynda.com videos on how to start a wordpress account, and install it on your own domain name. A bunch of my graduated students have done this, and use wordpress commercially in their work as freelance web designers. From talking with them, it appears they use wordpress commercially because it simplifies the MySQL database work. MySQL databases are what makes a webpage interactive, as in:

MySQL is also used for ecommerce, but I don’t think wordpress goes that far, though I’m not sure. The beauty of hosting your own wordpress site on your domain, is that you have total control of the appearance of your wordpress site. When you host your site on wordpress directly, your address is http://johnsmith.wordpress.com, instead of http://www.johnsmith.com.

The latter is preferable, because it looks better, shows you know what you are doing, and you have more control, from a web designers perspective, that is. This has nothing to do with the quality of the content. Good content can be anywhere from a wordpress hosted site to facebook and myspace…or stapled to a telephone pole. 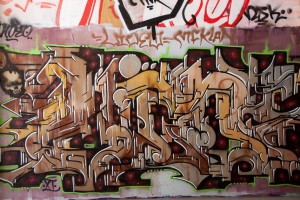 This is graffiti in a Tacoma parking garage down by old city hall.

Sidewalk paintings in chalk are a great example of content living on it’s own merits. A great chalk painting will last until it rains because people love it and avoid walking on it.

This photo is graffiti in a Tacoma parking garage. One of my student created a short film about these artists. He told me it was accepted into a film festival, might have been in Tacoma.  He also produced this cool movie with local talent in Tacoma. He spent months editing this as a school project.