We climbed the Squamish Chief in a day last Friday. Two weeks prior I was at Index with Christine and we met a friendly couple at Private Idaho. Torry said he had some time off. As we were leaving, I gave him my card and said that I was hoping for a long weekend at Squamish.

He texted me last weekend and said he was heading up with three friends and did I want to be the fourth? I said yes and we left Tacoma at 9AM. We climbed Star Chek Thursday afternoon, then got a dawn start on the Chief Friday morning. We started up Diedre at 7:30AM, topping out on the top of Squamish Buttress  after 11 pitches at 9:30PM. I also led S&M Delight cleanly, and cruised up Skywalker again, but the highlight of the trip was our journey up the Chief.

I’ve been seriously trying to get up that thing ever since I first saw it in 1979. I have no idea why I finally got up it. I do have a lot of knowledge of the lower approaches now, plus we had a strong and confident team. There was a moment at the top of Boomstick where we gathered together and considered whether we should go up or retreat. Committing to the summit meant we might have to bivy on the cliff in our shirts. We didn’t even have matches…though with the fire ban that was a non-starter. But we all looked at each other and said: “Let’s do this thing!”

The trail was easy enough to find…you simply scramble up from the top of Boomstick along the cliff edge until the trail heads left, joining up with the trail from Memorial Crack. A 20 minute hike through forest leads to the base of Squamish Buttress and a slab with one bolt. It’s rated 5.8, but feels like a 10A. Though that might have just been my heavy full frame DSLR, and the full rack of offwidth gear I carried up it. I was so scared I hung two fours, two threes and the five on the bolt to shed some weight. I felt sorry for Jaclyn, but there was no way I could make it up that loaded down. She was game though, and followed it carrying our water, shoes and all that gear.

She swung through and led the next two seven-ish pitches. I arrived at the start of the Butt Light pitches, which are both 5.9. I was so tired I had to rest on both bolts. I need to remember to eat steak and potatoes the night before, along with a big breakfast. The chimney move on pitch two of Butt Light was easy. I had a #5 and it fit perfect, but there was some decent finger sized cams as well, along with a green camalot slightly higher. I had my left shoulder in and walked my feet up the outside arete edge of the chimney until I could reach the jug with my left hand. It felt delicate and barely possible…but worked great.

After that pitch it was two easy pitches to the walk off. We were all super stoked. For me it was a 40 year goal, but for Torrey and Jaclyn it was their first time on the Chief, and they got to the top. 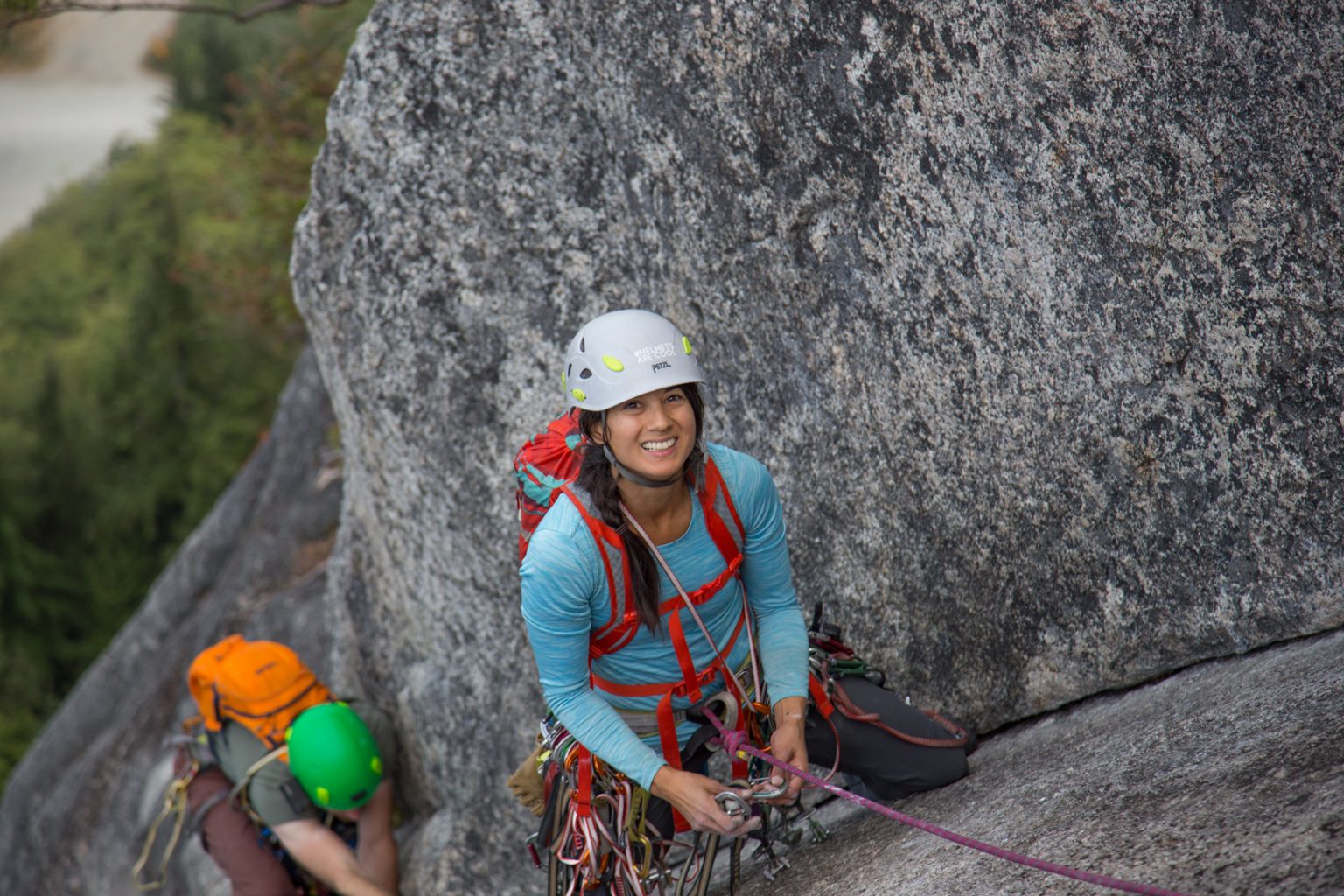 Jaclyn and Chad on Diedre 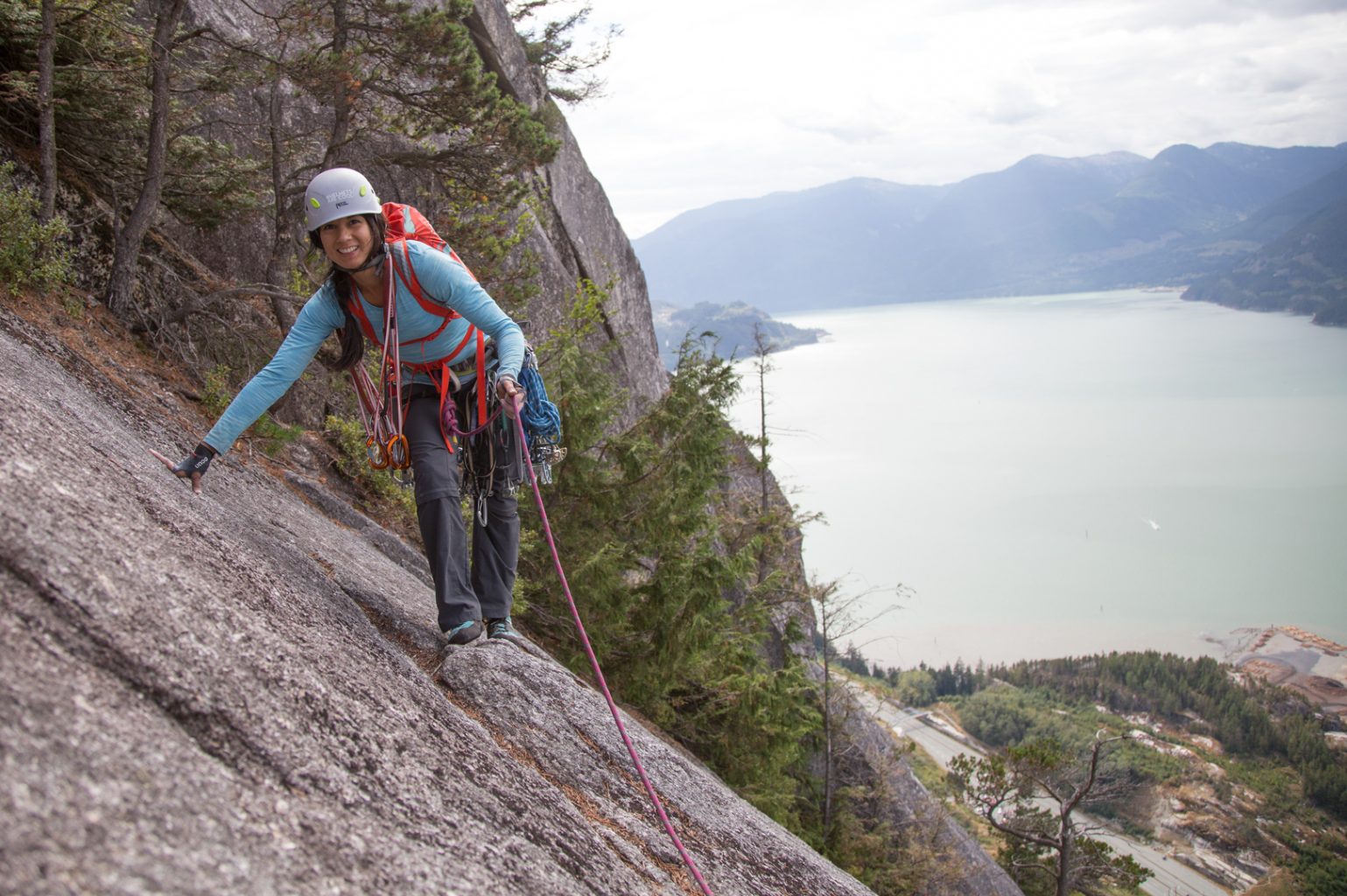 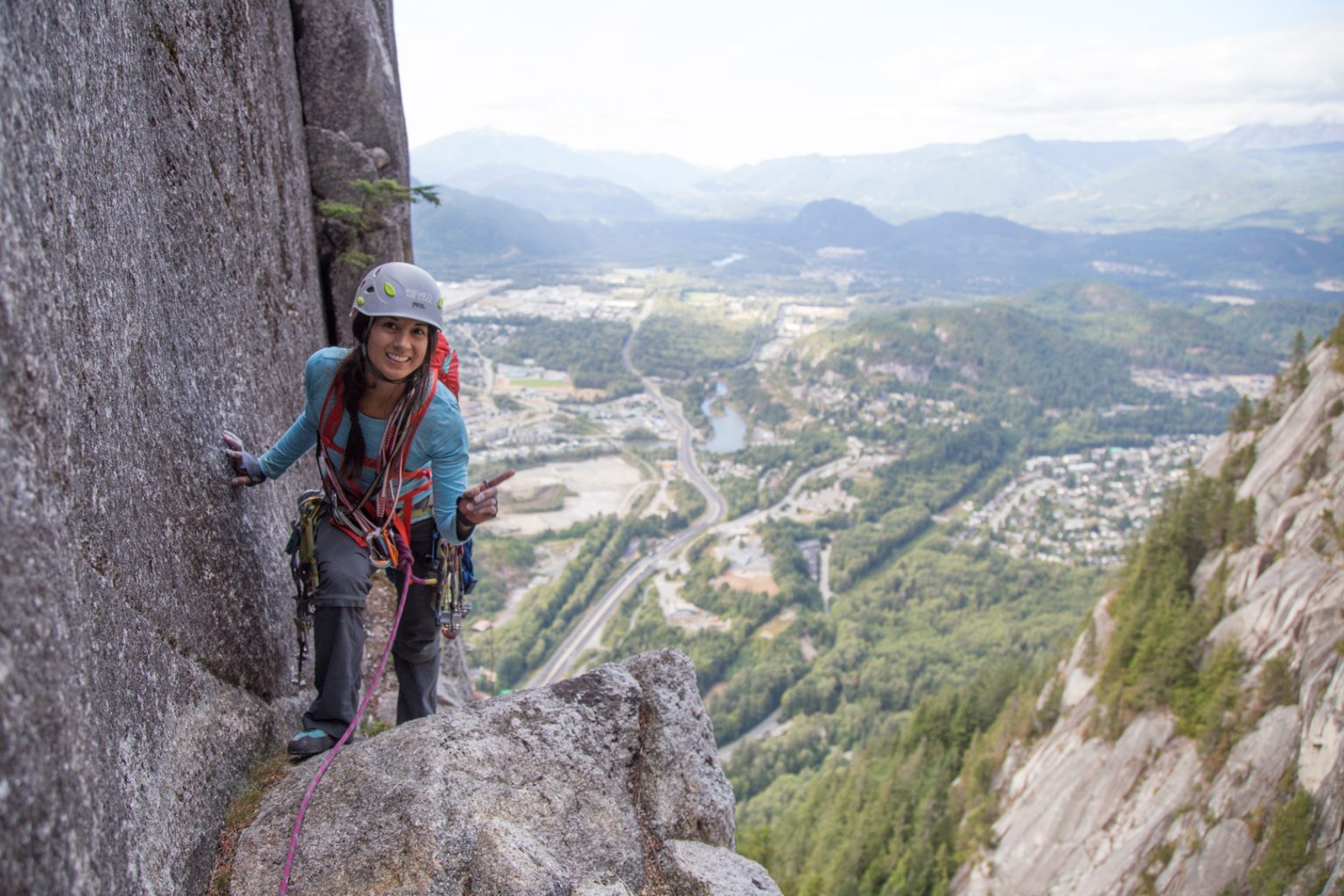 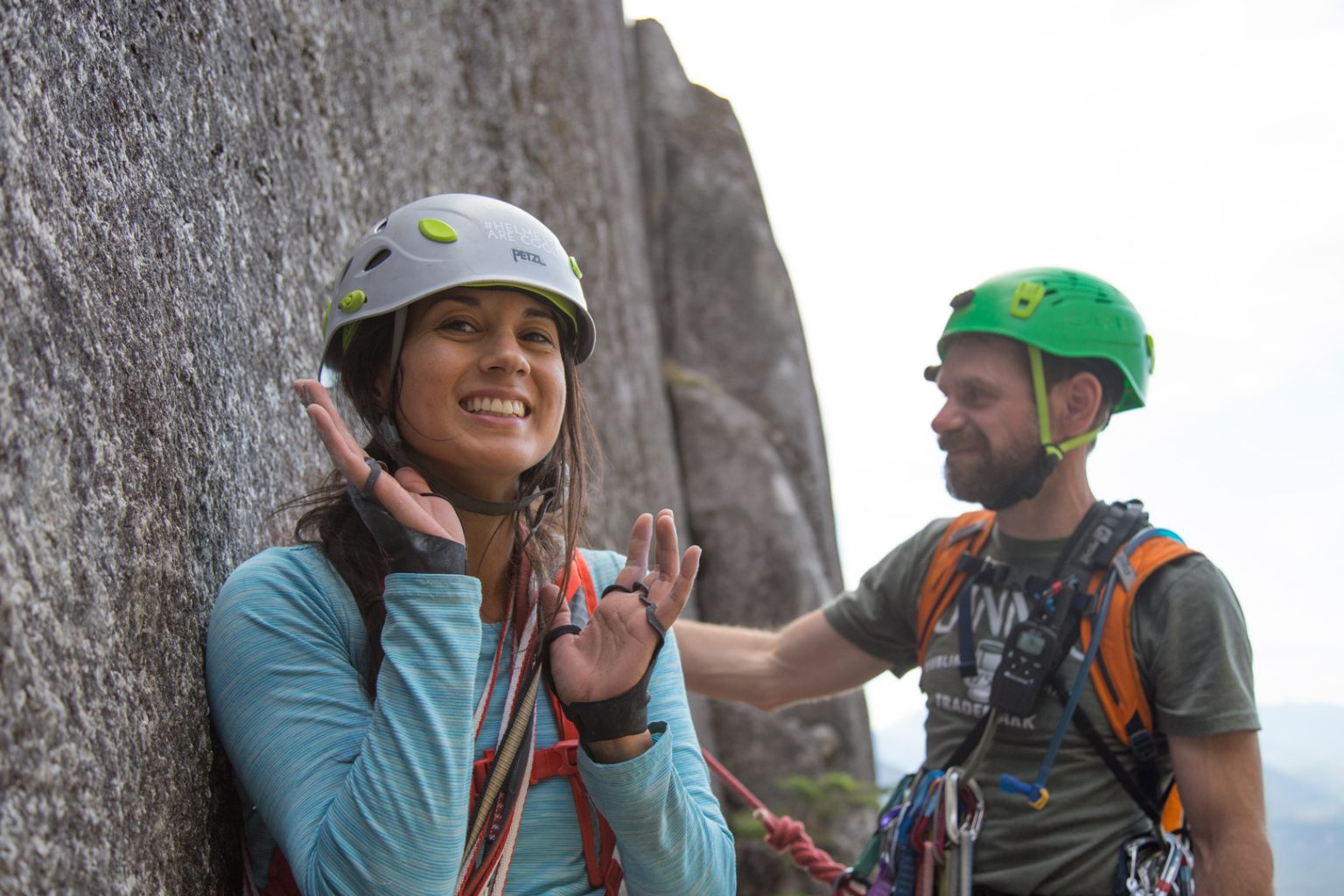 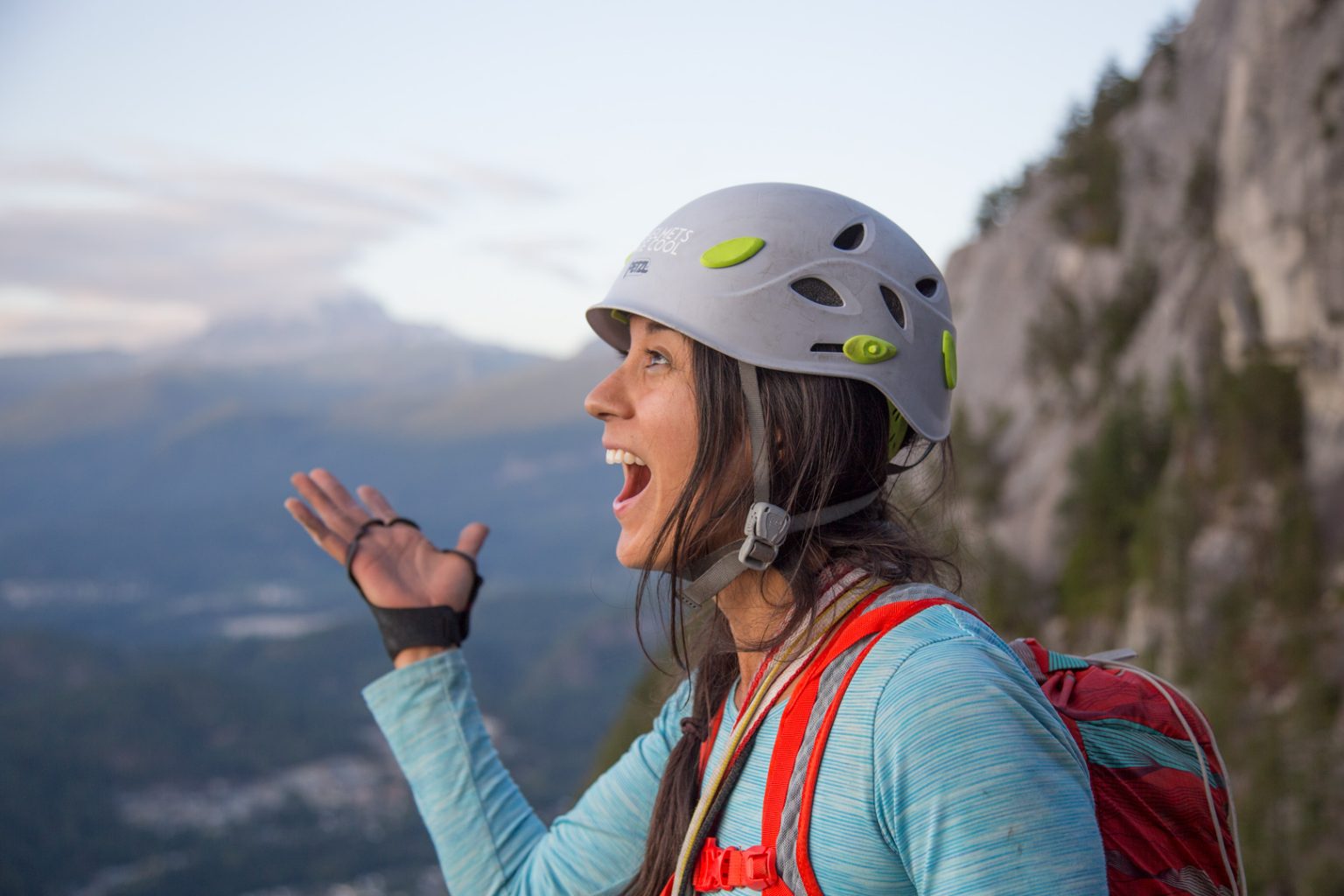 Jaclyn on top of the Chief at sunset, we were pretty happy 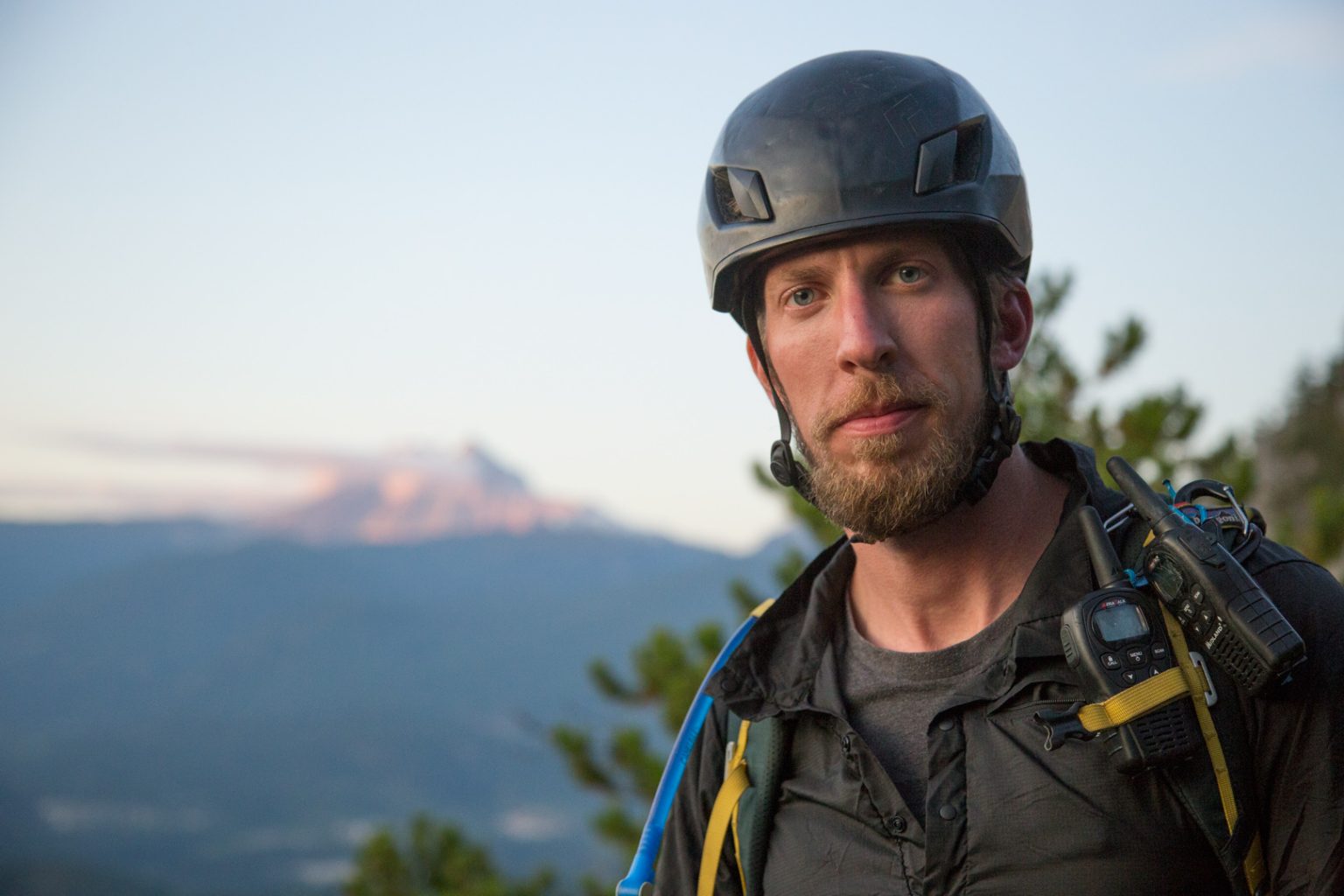 Torrey on top of the Chief. His first try, and he makes it to the top! 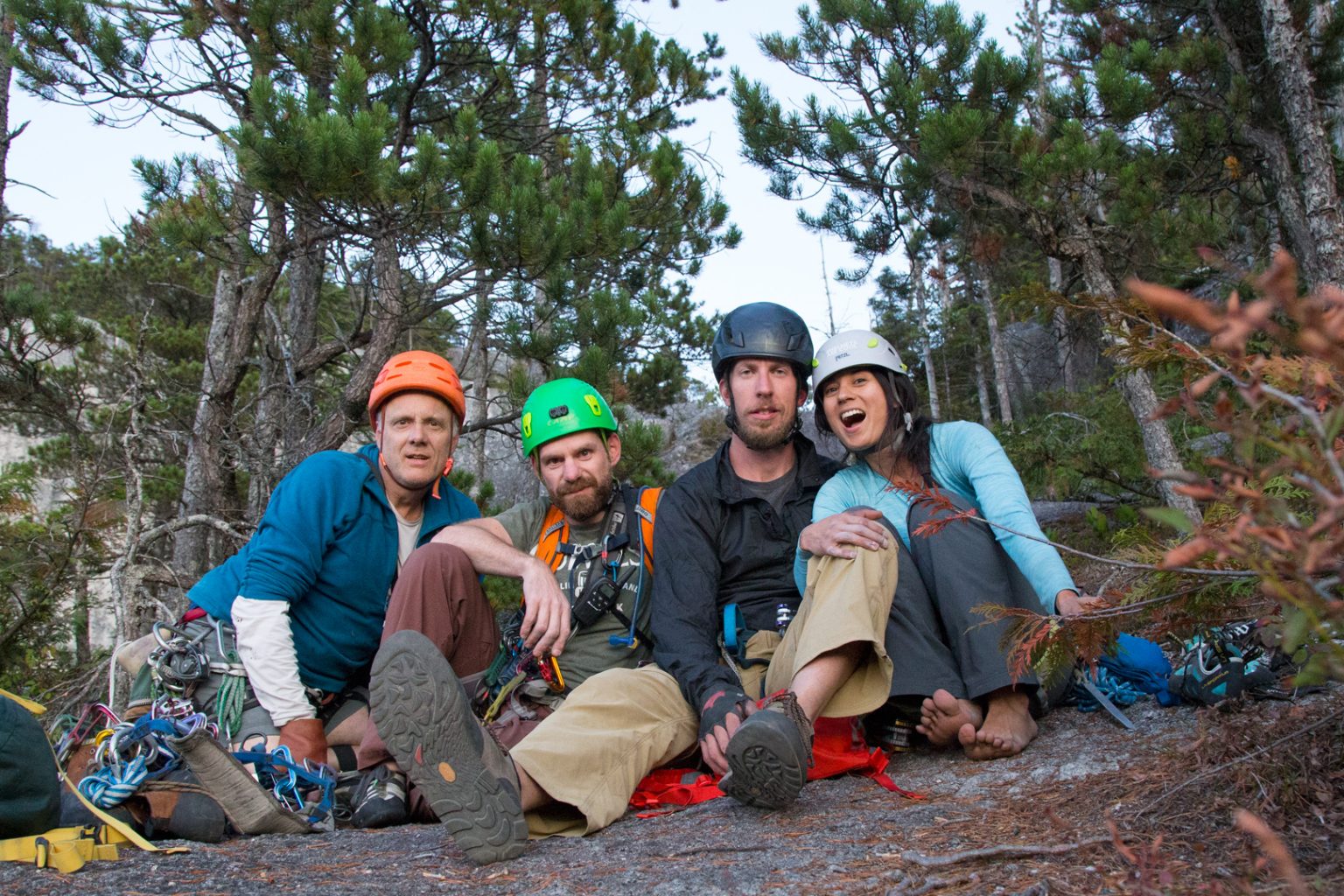 And then we had to hike down the tourist trail for an hour, in the dark, with all that gear. There was definitely some drinking when we got back to the tents. Man, were were so happy to have that in the bag. The next day we slept in and sat around in the sun until noon before heading to the Smoke Bluffs for some cragging. This was one of my all time best climbing trips ever. It’s funny how you can start a trip with total strangers, but after an epic adventure like this we were a band of brothers (and one sister).